20 Ways You, Like Hillary Clinton, Play The "Woman Card" (According to Trump) 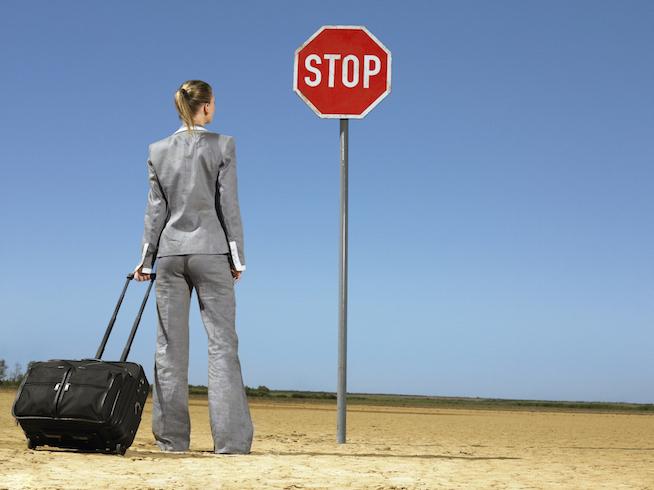 Famed woman lover (just ask him) Donald Trump, who was recently horrified by Hillary Clinton's need for a bathroom break during a presidential debate, decided to dig himself in a little deeper by accusing Clinton of "playing the woman card" yesterday.

Trump's accusations came in response to a recent interview where Clinton denounced the tone of his campaign, including his use of the phrase "got shlonged" to describe her 2008 defeat by President Obama.

"I think he has to answer for what he says, and I assume that others will make the larger point about his language. It’s not the first time he’s demonstrated a penchant for sexism. Again, I’m not sure anybody’s surprised that he keeps pushing the envelope," said Clinton.

In case you're wondering what the "woman card" entitles you to, I've got you covered:

1. Absurdly long bathroom lines while you watch men sashay into their empty bathrooms like goddamn kings.

2. Blood gushing out of your body about once a month for much of your life without your control.

3. Earning a whopping 79 cents per dollar earned by men for equal work (and that's if you're white!).

4. The frustrating knowledge that the gender wage gap isn't going anywhere anytime soon (it narrowed by only ONE whole penny in 2015. Don't spend that all in one place, ladies).

5. Being called a slut pretty much any time you have sex outside of marriage.

6. Being called a slut pretty much anytime you say no to sex outside of marriage (I do not think that word means what you think it means, assholes).

7. Hearing that you need to cover everything from your legs to your shoulders to avoid "distracting" boys at school.

8. Suffering from rape and sexual abuse at astronomical rates.

9. Being told your rape and abuse were probably your fault ("Was your skirt too short?", "Did you have a drink?", "Are you sure you said no?").

10. Even if people deign to believe that your rape actually happened, listening to the same people that told you to "get over it" lamenting how rape charges ruin men's lives.

11. Having to fight for the legal right to make decisions for your own body.

12. Facing jail time for those decisions.

13. Struggling to preserve access to affordable birth control while watching men retain insurance coverage for medications like Viagra (because where sex is concerned only THEIR pleasure matters, you silly girl!).

14. Being labeled a "feminazi" nut-job each and every time you insist on equality.

15. Suffering vicious attacks online that extend to your job, home, and family simply for expressing your opinion in a public forum (Gamer Gate, anyone?).

16. Knowing that your consent is always assumed.

17. Receiving a relentless onslaught of comments and feedback on your body without ever requesting a single one.

18. Hearing that your mom body is disgusting while men with "dad bods" are considered sexy.

19. Struggling to find yourself represented in positions of power, or portrayed in movies or music as anything but a sex object or sidekick.

20. Being blamed for someone else's sexism.

If you like this article, please share it! Your clicks keep us alive!
Tags
Hillary Clinton
donald trump
donald trump sexism