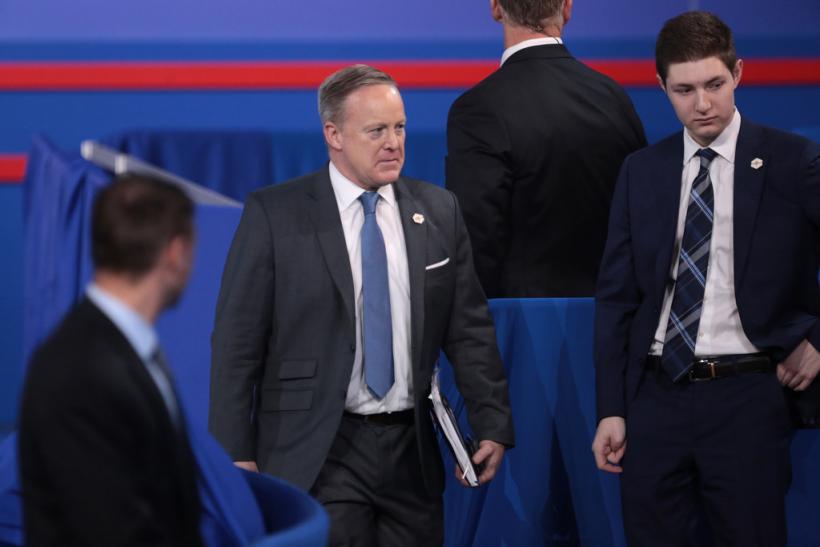 In the US, our current sham of an administration is continuing its goal of dismantling the free press by treating them in precisely the way a fascist regime does — not only by refusing to allow the press to video or audio record press briefings, but by trying to force them to not to report on these restrictions.

There are a fairly stunning number of plausible reasons that Bannon could have given for wanting to keep the press secretary away from the press.

He could have explained that our current “president” is a chronic and constant liar who often sends Spicer to the podium to tell blatant lies (sometimes only in service of his ego) and that, while Sean is perfectly willing to do so, they’d rather those reporting on them not have film to go along with it.

He could have pointed out that this administration has the thinnest skin in history and it’s slightly less easy for Melissa McCarthy to make fun of Spicer on Saturday Night Live if there isn’t readily-available footage of him making himself look like a jackass.

They could have said that, after some research, it wasn’t feasible to put hedges for Sean to hide in — I mean among — in the briefing room when the mean old reporters insisted that he do his job with some base level of competency.

He could have said that this was a first step to get Spicer the hell out of the press room while they figure out how to call it a “promotion.” Nobody would have had any trouble believing any of these explanations.

But Bannon didn’t say any of these things.  In the face of being asked by a reporter why the White House is blatantly trying to prevent them from informing the American public, the so-called chief strategist to the so-called president replied:

The reporter followed up but Steve went dark. 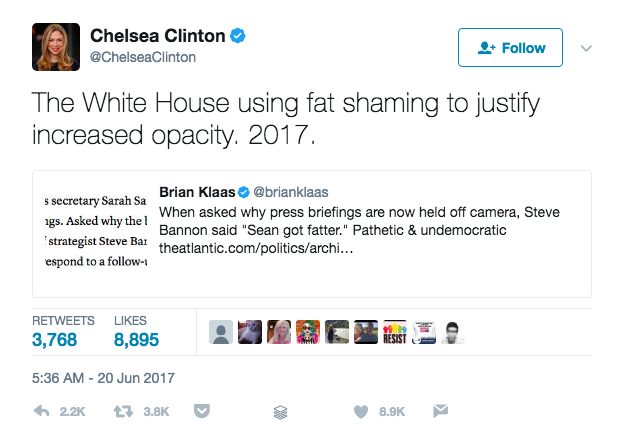 Of course she got trolled for her trouble, mostly with that chestnut of derailing: “It was just a joke!”

For the sake of argument, let’s say that it really was “just a joke.” How is that ok? How is it ok for the White House chief strategist to answer a question about the administration’s thwarting of the free press with a joke? Maybe that’s how they do it at Steve’s KKK meetings, but that’s not how it should be done at the damn White House.

But it’s not just a joke — it’s a fat joke, and that matters.

If we believe the answer that the White House chief strategist gave to a reporter, it implies that the White House believes fat people shouldn’t have public facing jobs in the administration. Even if we think that he’s brushing off an important question from a reporter with a questionable attempt at humor, it’s really not OK to add to the metric ton of fat stigma and oppression that exists. By the way, it doesn’t matter that neither Steve nor Donald is thin, since internalized oppression and relative privilege are very real.

The real problem here is the idea that somehow fat shaming is OK because enough people think it’s funny. If that’s the case, then we are stuck constantly having to try to figure out what fat shaming is “hilarious” and what fat shaming is hurtful. The truth is that something doesn’t have to be the “worst” kind of fat shaming in order to be harmful. These jokes don’t happen in a vacuum — we live in society where fat people get hired less and paid less than our peers, pay more for insurance just to get subpar healthcare, and have to deal with constant shame, stigma, bullying, and oppression. So a high ranking government official participating in fat shaming supports a culture where fat shaming (including the worst kind) is considered OK, and that’s a problem.

Fat shaming is wrong in any guise, and people who are trying to be funny (and/or trying to cover for a woefully incompetent press secretary) will just have to do better than relying on cheap stereotypes, shaming, and bigotry.

If you like this article, please share it! Your clicks keep us alive!
Tags
fat shaming
Sean Spicer
Politics
fatphobia
Trump administration