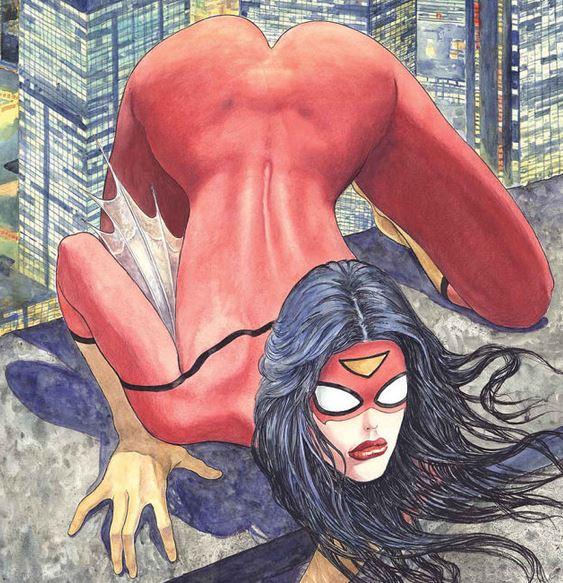 First, the good news: Marvel has just released the first Spider-Woman comic book. Now the bad news: It appears Spider-Woman's only discernible skill is rocking the world's fiercest ass. As shown above, the cover is almost completely dominated by our intrepid hero's heart-shaped derriere, clad (but of course) in impossibly clingy spandex. (Tell me it doesn't look like she's taking the entire city doggy-style.)

Another day, another case of obscene sexual objectification in the deeply misogynistic comic book world.

It takes all of five minutes of Internet searching to discover a disheartening truth: Female superheroes more or less exist for the exclusive purpose of inciting hard-ons. There are lists galore ranking the hottest female superheroes, a "Hottest Comic Book Babes" Facebook group, and even a March Madness-style bracket dedicated to crowning the most desirable of all crime-fighting hotties—helpfully organized into the categories of "Foxes," "Vixens," "Babes" and "Femmes."

Pretty much across the board, the female superheroes men swoon over are 10% crime fighter and 90% tits and ass.

To take but one example, here's a rendering of X-Men's Mystique, using her ample bosom as a gun cushion: 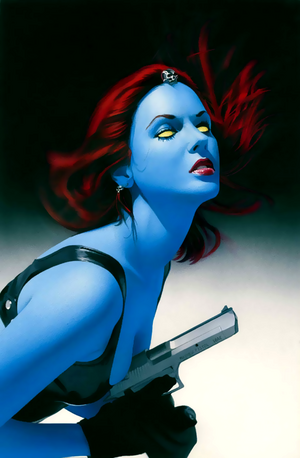 And here's X-Men's Emma Frost, winner of the aforementioned March Madness bracket, looking ready for a striptease in an anatomically impossible "top." (Not to mention no camel toe in those skin-tight trousers.):

Mind you, these are just the sanctioned comic-book illustrations; the fan-boy depictions get decidedly lustier . . .  and even bustier.

True, superhero dudes are often depicted as beefcakes, but their hotness isn't a defining quality in the same way it is for women, who are often styled for the express purpose of looking sexy.

Furthermore, male superhero hotness is often the result of super-strength and bulging muscles—which makes sense in the context. Female superheroes, conversely, are endowed with hyper-sexualized body parts that have no bearing at all on their ability to kick ass. If anything, in fact, it seems the giant bosoms and starved bodies would make crime-fighting more difficult.

All of which raises the question: How in Wonder Woman's good name did we get here?

Not surprisingly, in the early days of comic books, female characters were generally of the "distressed damsel" variety. Yet during World War II, patriotic heroes began making an appearance, appealing to both genders during a time of deep national pride. Soon, female heroes were making an appearance as well; alas, those appearances left much to be desired.

As an omen of what was to come, one of the earliest female superheroes was Torchy, debuted in 1946 as a midriff-baring, leggy, busty blonde who "frequently finds herself in humorous, mildly risqué encounters with lustful men." Here's the cover—complete with faux sword erection—of issue five for the series: 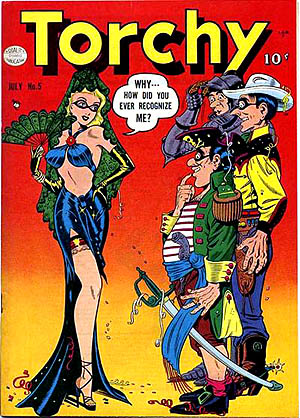 Even Wonder Woman (also introduced in the 1940s and often heralded as a feminist icon for possessing actual superpowers) has a history of sexual objectification and perpetual breasts enhancements.

Comic book historian Ron Goulart went so far as to claim that early depictions of female superheroes were a precursor to nudie mags, writing, “In the days before the advent of Playboy and Penthouse, comic books offered one way to girl watch."

While it may not come as a surprise that female heroes were sexually objectified 70-plus years ago, what is disheartening is the realization that not much has changed in the ensuing decades. If anything, the Internet has cultivated the increased sexual objectification of comic book women. Meanwhile, screen depictions have done the cause few favors; eye-candy depictions of female heroes range from X-Men's Mystique, played by Jennifer Lawrence in nothing but blue paint, to Catwoman's titular hero, played by Halle Barry as a scantily vinyl-clad pussycat.