8 Quotes To Live By, Courtesy Of Lisa Simpson 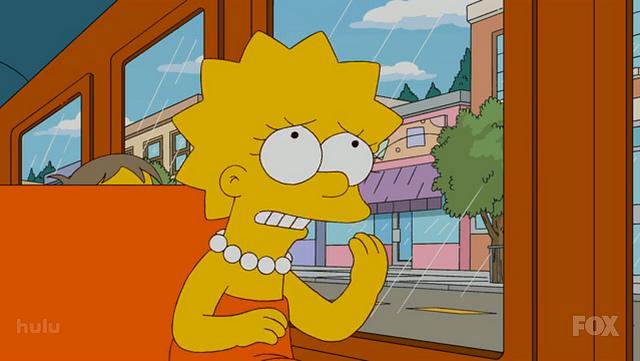 Few TV shows have had the cultural impact of The Simpsons. . . . and we're not just talking about the numerous A-list guest stars. The show does snappy social commentary better than any program out there. And surprisingly, some of its sharpest, most finely drawn characters are the children.

Case in point: Lisa Simpson, who is quite clearly often the most enlightened thinker in a room full of adults.

Currently, The Simpsons is marathoning on FXX. Better yet, it's poised to be the longest TV show marathon ever, running full steam ahead until Sept. 1. In honor of Matt Groening's empire, we celebrate some awesome gems of wisdom from the ever-brilliant Lisa.

Thank you, Matt, for creating a character than has been a role model to young girls and adult women for 25 years and counting.

Lisa: "Well, I wish that you wouldn't. Because, aside from the fact that he has the same frailties as all human beings, he's the only father I have. Therefore, he is my model of manhood, and my estimation of him will govern the prospects of my adult relationships. So I hope you bear in mind that any knock at him is a knock at me. And I am far too young to defend myself against such onslaughts."

Takeaway Lesson: We can't pick our parents. Feel how you want about a person, but spare their offspring of your negative judgments. In other words: You can call your dad a jerk, but no way is anyone else calling your dad a jerk!

Takeaway Lesson: Niners are the best. That is all. (Note: This quote is from season three, before the Raiders moved to Oakland).

Lisa: "Everybody needs a nemesis. Sherlock Holmes had his Dr. Moriarty. Mountain Dew has its Mello Yello. Even Maggie has that baby with the one eyebrow."

Takeaway Lesson: A little competition is good. Don't worry about making everyone like you—just be yourself.

Lisa: "Mom, romance is dead. It was acquired in a hostile takeover by Hallmark and Disney, homogenized, and sold off piece by piece​."

Takeaway Lesson: Corporations manipulate us to make a profit. Such measures leave us with unrealistic ideas about basic human emotions.

Lisa: "But you know Bart, some philosophers believe that nobody is born with a soul. That you have to earn one through suffering and thought and prayer. Like you did last night.​"

Takeaway Lesson: Own your pain. Crying in a bottle of wine while binge-watching Sex And The City episodes alone cultivates a sense of self.

Lisa: "Friends? Ha! These are my only friends. Grown-up nerds like Gore Vidal. And even he's kissed more boys than I ever will.​"

Takeaway Lesson: Vidal got laid more than all of us combined. No matter where we young writers journey in our careers, he will forever one up us in this category.

On the Second Amendment

Homer: "But I have to have a gun! It's in the Constitution."

Lisa: "Dad! The second amendment is just a remnant from Revolutionary Day. It has no meaning today."

Takeaway Lesson: As a culture, we grow and evolve over time. Our governing rules should be subject to change as our society progresses.

Lisa: "I learned that beneath my goody two shoes lies some very dark socks.​"