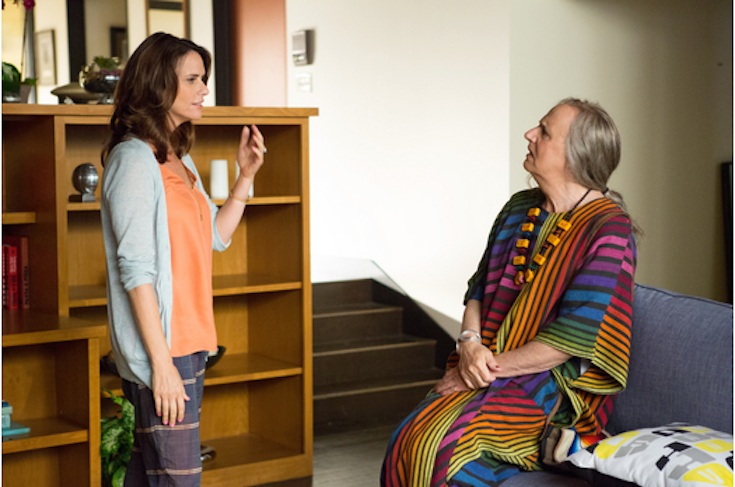 In case you hadn't noticed, were in a coma, under the proverbial rock, etc. etc. etc., trans visibility is a hot topic these days. While everyone continues to froth at the damn mouth for Orange is the New Black (myself included) I'm happy to report that Amazon Instant Video has one upped the ante on the celebration of transsexuals all wrapped up in a binge-worthy delight.

Quick synopsis: Transparent traces the ins and outs of a Jewish family in LA toggling between flashbacks and a sequential plot. Standing at the center of the familial melee is the family patriarch, Mort, who becomes Maura. Played by Jeffery Tambor of Arrested Development, Tambor beautifully traverses an honest, complicated—and sometimes painful—path. Maura is, not-so-surprisingly divorced from her ex wife with whom she has three adult children with: Sarah, Josh and Ali.

Here's why you, me and everyone else should get in front a glowing screen ASAP:

2. Wow-inducing Family Dynamics
The fight to decide who has the strangest TV family may be over. Having played George Bluth Sr. (and Oscar) on Arrested Development, Tambor may take the cake for best-scripted—and portrayed—patriarch of all time. But wow, Maura is giving Bluth a run for his money.

Happily, everyone has their own issues however; Maura is not alone in her struggles. Josh is wickedly image conscious and thinks about work when having sex. Sarah is trapped in a dead-end marriage, and lusts after her former college girlfriend. Ali is unemployed and forms an enviable interesting relationship with her trainer. When together, the brood talks over and about each other relentlessly. It's obvious that it drives Maura crazy.

Maura confides to Ali that they understand each other because they share the same "depressive" gene. Sarah acts like the matriarch of her siblings, but they don't really look up to her. Josh and Ali share a close bond, but he's quick to fight when he doesn't get his way. It's confusing and clever and awesome.

3. Not-So Tidy Topics
On a show that centers around a trans person coming out, it should come as no surprise that other "taboo" topics are tackled as well. From abortions to the fluidity of sexuality Transparent doesn't shirk the shadowy parts of life. Rather than the all-too-typical, "gay, straight or bi—make up your mind!" trope, the focus is actually on lost loves. Can you still love someone that you haven't spoken with in years? What is "moving on?" Is it possible to "mix business with pleasure?" Best yet? The show demonstrates "acceptance" and its various forms.

Oh, and each episode is only half an hour.

4. Authenticity In Exploring The Trans Experience
Trans rights is a heavy subject. It's misunderstood at best. One of the most powerful moments comes out of the first episode when Maura explains herself to someone else. Maura's asked if she's going to "dress like a lady" 24/7 here on out. Tearfully, Maura explains that that's not the objective—rather, she's been dressing as a man her whole life. Now, she finally feels like herself.

Transparent did its job well: trans consultants were hired to make sure the show was detailed properly. Additional research was conducted to ensure authenticity. Given that, hearing the other trans characters talk about their families abandoning them is tragic and misery-making. Hey, I didn't say this was a light dessert people.

5. It's About More Than The Trans Experience
As you can see, there's a lot going on. In real life, the world doesn't stop spinning when someone comes out. Issues that existed prior to that bomb drop won't disappear (though they may alter in some way). Everyone lives a complex life. Characters are multi-faceted. Problems do not necessarily revolve around the central topic. As the (proud) older sibling of a gay woman, I can relate to some extent. Hearing that someone you love has "always" had a secret side is an odd moment, but it doesn't change everything (at least, it shouldn't). Life goes on, as ever-complicated and weird as it was before.

Relationships may be redefined, but time will still march on in its speedy beat until the next—and inevitable—revelation rocks one's world. And this is captured perfectly in Transparent.