What I Learned As A Planned Parenthood Escort 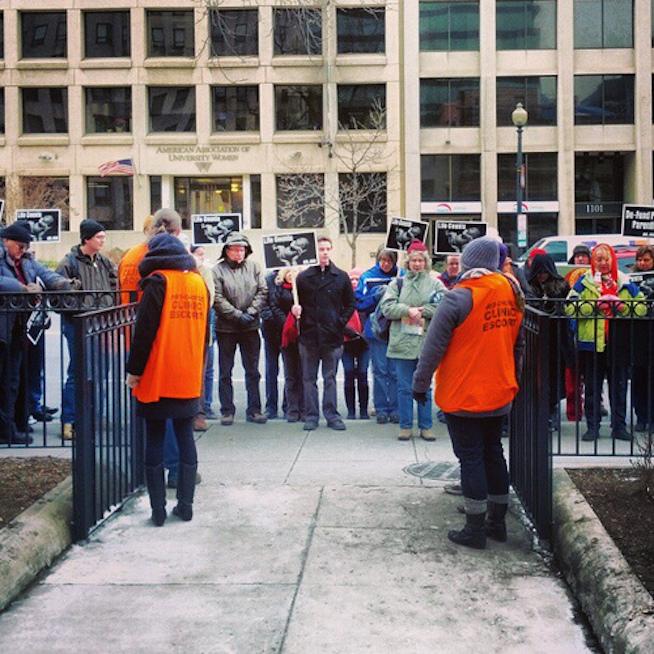 "We were there. Always."

My job was to stand within a few yards of the door with a welcoming expression and a hand extended, a visual reminder of both the protester’s 'physical limits and of the nonjudgmental support the patients could find in us.

I’ve always been pro-choice, though over time — as abortion rights have been attacked again and again — my convictions have deepened. So when I moved to a new city and found out a local abortion provider had volunteer opportunities, I gave them a call. It was a large, progressive city, so I wasn’t sure what the experience would be like.

For the next five years, I served as a volunteer escort at that clinic, it turns out it was one of the most meaningful things I’ve ever done.

At the start, I volunteered once or twice every week. Every Thursday and most Saturday mornings, I’d ride the train over, grab my orange vest from the security guard, and take up my station outside the clinic door.

Saturday mornings were fairly quiet then. There were typically one to three older folks milling about out front with flyers in their hands. One woman would park on the street within eyesight of the doors and stand a large poster up on her trunk, leaning against the back window of the car. The poster featured gruesome photos of supposed aborted fetuses blown up beyond lifelike proportions. Then the protesters would stand near the corner, with one typically catching people right out of the train station, quietly and solemnly shaming everyone who came within reach, trying to get literature into their hands, regardless of their actual destination.

Most people would roll their eyes and ignore them. Some would offer a kind suggestion on exactly where they could shove their opinions. But occasionally they would catch someone actually coming to the clinic. Maybe a young couple. Maybe a woman on her own. And you’d see them waver. Damnit. That moment of hesitation was all it took for all three protestors to quickly swarm and start loudly pleading with the person they’d cornered. It didn’t matter if the person insisted they were just there to get a prescription refill or pick up some free condoms. Crumpled and grotesque graphics were pulled out. Brochures shoved into hands and faces. Admonitions of hellfire and eternal damnation yelled into ears.

I never saw a single person change their mind during these interactions, but I did see a number of vulnerable people unnecessarily traumatized.

As an escort, it wasn’t my job to interfere in these interactions. The First Amendment does not permit the protestors to physically block access to health care facilities, but it does protect their right to verbally traumatize people on the sidewalks nearby.

My job was to stand within a few yards of the door with a welcoming expression and a hand extended, a visual reminder of both the protesters' physical limits and of the nonjudgmental support the patients could find in us.

Thursday mornings were far more interesting than Saturdays back then, as the regulars were two old men, one of whom was much more enthusiastic than his weekend counterparts.

One man stood across the street, quiet and unassuming, politely trying to hand flyers to passers-by. The other was a well-known “pro-life” protester, having made a bit of a name for himself during the Teri Schiavo spectacle. It wasn’t hard to see why. Disheveled and unshaven, he’d stand just out of arm’s reach of the other escort and me and verbally assault us for two hours straight.

You’re a piece of shit. SHIT. No one will ever love you because you murder babies. You smell like shit. You’re making people murder babies, you shit, and you’re going to burn in hell. You’ll die alone, covered in shit, you piece of shit. Worthless. Alone. Shit.

Somehow he didn’t seem threatening, but just…sad. He knew his physical restrictions and always respected them, staying far enough back from the doors — and us — that he wasn’t breaking any laws. But still close enough to spew profanities at us. The problem was, after the 27th utterance of the word “shit,” it was hard not to laugh. He would’ve been more effective, perhaps, had he diversified his insults.

When he did take breaks from the verbal assaults, it was only to collectively insult everyone within a two-block radius. Surrounded by tall buildings on a quiet street, he would take a deep breath and bellow MURDERRRRRRERRRRRRS! Again and again. And again. His cries would bounce off the buildings and echo down to the sidewalks.

During all of this, we stood. Quietly. Eyes ahead. Shit-eating smirks just barely contained as patients passed us, walking into the clinic. (Shiiiiit!)

Needless to say, his behavior didn’t earn him any sympathy from the neighbors. One woman from the building across the street would sometimes bring us hot cups of coffee from the café around the block and invite us to pet her dog, then tell the protester to go fuck himself as she casually turned back toward home.

I am proud to say I never cracked.

Over those five years, I volunteered on hot summer days and rainy mornings. I stood in snow, wearing warm layers and fleece mittens. I volunteered beside women and men, many of them young, like me, but some older and wiser and living out a lifetime of experience on those sidewalks. For a long while I volunteered every week and sometimes it was only every couple of months. I volunteered as a grad student and later through the first half of my (planned) pregnancy.

Standing out there with my fellow escorts, we’d chat, talking generally about ourselves and our interests, but never in any detail as we didn’t want the protesters to learn any personal details about our identities or lives. So I got to know my fellow escorts, but not really. In the end, we were connected only by our shared passion for protecting a woman’s right to personhood.

More often than not, clinic escorts would stand unopposed during inclement weather, as it seemed the protesters’ convictions about the sanctity of life weren’t strong enough to withstand the slightest drizzle or temperatures below 50.

But we were there. Always.

If you like this article, please share it! Your clicks keep us alive!
Tags
abortion
Planned Parenthood
escort