On Ghosting: Oh, The Lengths We Will Go To Avoid Confrontation 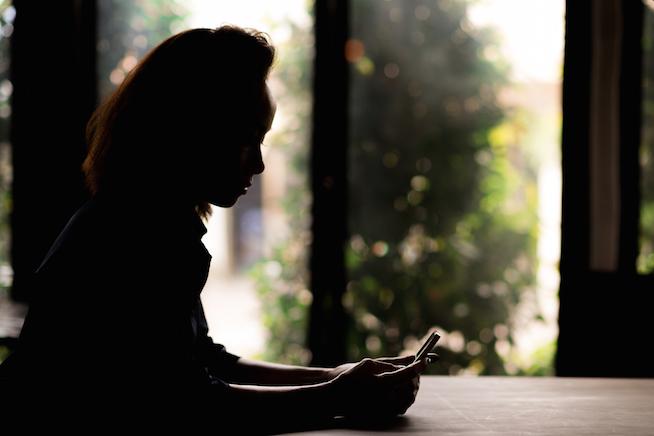 This story involves jumping out a second-floor window.

Ghosting is really about avoidance. We ignore texts, phone calls, and emails, and fade away slowly or quickly, in order to avoid confrontation or what really amounts to an uncomfortable conversation. But, the thing is, we end up acting like assholes.

Because you acted like a stupid bitch. That’s what it says on the paper, the tiny piece of paper or maybe envelope or napkin that I found in the box of old letters I keep stashed in my closet. I stare at the words and read them out loud, in hopes that the action will shake loose the memory. Nothing. I shut my eyes. Did I write this? Why did I keep it? The memory returns like a slap.

I deserved the note. I spent much of my early adulthood off and on drugs, in and out of relationships, and generally wreaking havoc in the lives of the people closest to me, or to those who happened to be in my orbit at one time or another. Commitment was an issue. That is not to say that I didn’t love deeply and passionately, but I was bad at it.

In recent months, there has been a lot of talk about “ghosting.” While it’s not a new phenomenon, the terminology is new and trending to the point that The New York Times recently ran an article about the subject. Ghosting is really about avoidance. We ignore texts, phone calls, and emails, and fade away slowly or quickly, in order to avoid confrontation or what really amounts to an uncomfortable conversation. But, the thing is, we end up acting like assholes.

The author of the little note I found was, once upon a time, a friend of mine. We had many mutual friends, hung out all the time, and I was aware that he had a crush on me, although I pretended to be clueless — an infuriating tactic I employed regularly in my 20s. One drunken night, I ended up with him, back at a mutual friend’s studio apartment, whom he was house sitting for. I knew it was a mistake, but I kissed him anyway, wondering where Molly the mean monkey was. (Yes, our friend had a pet monkey and she was mean.) The stakes were too high for him. My mind was floating out the door, although my body remained. And we had sex.

Afterwards, in the dark, I began inching away from him and holding my breath. His silent enthusiasm remained heavy. It made me feel nauseous and sad — sad for him that I couldn’t be what he wanted me to be, sad for me that I was so shut down, and sad for the mean monkey, wherever she was. Actually, I thought, that monkey’s mean, I don’t feel that sad for her. The air was thick with sweat and release and looming rejection. I felt paralyzed. He began to speak.

He told me that he had feelings for me — no, he thought he was falling in love with me — no, he was in love with me. I stared at the cracked pendant lamp hanging from the ceiling. My fingers went numb and the wavy stucco walls melted towards me. All I could say was, “But you don’t even really know me.”

He brushed this off with bold statements, listing all the things he loved about me. I strained my neck to see if the window was open. I needed air. I was fairly certain that the cracked pendant lamp above our heads was a vacuum, sucking all the oxygen out of the room. I needed to focus.

He got up to go the bathroom. In a panic, I threw on my jeans and bra, and ran on tiptoes towards the front door. It was locked, from the inside. Scanning the room, I couldn’t find the key. Keep passing the open windows. The window! I bolted for the nearest window, opened it, threw my sandals, purse, and shirt to the ground, and jumped, from the second floor into the bushes below. The scrapes and bruises seemed a small price to pay. I could not confront his feelings for me. It wasn’t his fault. I wasn’t capable of accepting love.

I can only imagine what he thought when he exited the bathroom and found that I had left — window open, girl gone. We never spoke much again. We saw each other but pretended we didn’t. One night, at a karaoke bar with our group of friends, I tried to make small talk and he wouldn’t respond. I asked him why he was giving me the silent treatment. He scrawled that little note and shoved it across the table: Because you acted like a stupid bitch. I shrugged. He was right. That’s who I was then, willing to go to any lengths to avoid feelings, yours or mine.

All that avoidance didn’t spare me from feeling uncomfortable, guilty, or pain. It would have been so much easier to be honest. And we’ve all done it: maybe not to the extreme of jumping out a window, but the result is the same. We prolong our discomfort by avoiding things. Since I’ve grown up a bit over the years, I do my best to mean what I say and say what I mean, to allow other people to express themselves to me even when it is not what I want to hear, and above all to face things, no matter how uncomfortable. Life is far less stressful when you know you’ve kept your side of the street clean: there’s no one out there you're afraid to run into, and you’re not going to find yourself apologizing for being crazy/acting like an asshole/being an all around jerk, because you were afraid to tell it or hear it like it is.

If you like this article, please share it! Your clicks keep us alive!
Tags
ghosting
dating
avoidance behavior