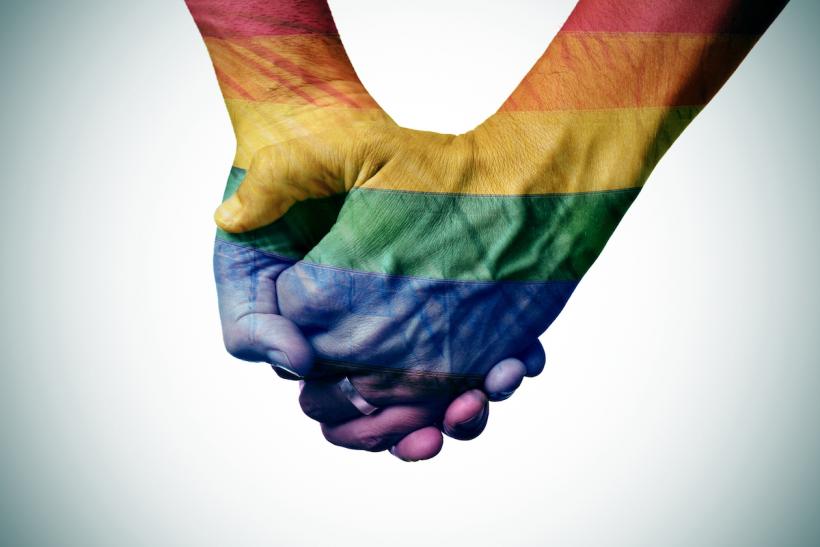 To the individuals, families and communities affected by the tragedy in Orlando: the pain and fear you feel right now is real. Image: Thinkstock.

Hate hurts us all, but we don’t all receive it with the same systemic intensity.

It feels so wildly inappropriate to write about my wedding in the wake of a national tragedy like what happened in Orlando. It feels wrong, somehow, to talk about mine and my partner’s lives, and our love, outside the political context.

It feels wrong because it is wrong.

Mine and my partner’s lives, and our love — like all people’s lives and love — are political.

So, let’s start there:

I’m a cisgender white woman who dates mostly men. For most of my life, I’ve identified as straight. My partner is of mixed heritage and bisexual.

Together, we read as heterosexual and white, though we’re queer and Arran is part Sri Lankan (though it’s true he has white passing privilege).

I think of myself as “straight” sometimes, even though I’ve had sex with women and am attracted to women and nonbinary folk.

In my mid-20s, I had a relationship with a woman — Brie. I was in love with her. Though relatively brief, it was one of the most meaningful relationships in my lifetime. Never mind the fact that I was in a supposedly monogamous relationship with a man at the time, between Brie and I, there was complete honesty.

We shared values. The sex was great. It was the first relationship I'd had that was both emotionally and sexually fulfilling. It took time to leave the guy I was dating, but my relationship with Brie helped me see how he and I weren’t a good fit.

Brie helped usher me towards my truth.

Sometimes I don’t think it’s right for me to identify as queer because I know I’m not typically read this way.

Both my partner and I pass as straight, regardless of who we’ve slept with in the past or who we might be with if not each other. We benefit from straight privilege, even more so now that we’re engaged.

And yet, in the wake of this tragedy, I realize that how our sexuality is read is our choice.

At the time Brie and I were together, I had an extremely homophobic boss. I lived in fear that if my boss found out, it would jeopardize my career. And anyway, it was an affair; I kept it hidden.

These days, however, I have little to fear by outing myself. Even so, sometimes when the right choice is obvious, I’ve chosen to remain comfortable. I've had a hard enough life, I sometimes think to myself. I'm sick of feeling “different.”

I had my wild twenties, but that's all over. Up next: Beautiful wedding. Husband. House. Kids.

As a writing instructor, I’ll sometimes use personal stories in class to illuminate something for my students. One time, years after my relationship with Brie had ended, I found myself telling a story that involved Brie. I realized mid-story that I was about to out myself (I was probably dating a man at the time), and so I changed her gender to male.

It’s an incomparable feeling to be in a place where everyone is talking openly and honestly about who and how they love. What’s so galling about what happened in Orlando is that it happened in a presumably safe space.

I told myself I did this so as not to distract from my point — which is the same thing I tell myself when I don’t reveal my past as a sex worker.

Fact is, these things do distract some people.

And yet, when I look back at that moment now, I recognize my cowardice.

I wonder who else in that room might have been switching the pronouns of the people they loved so as not to call “negative” attention to themselves. As the instructor, I could have made the room a safer place for other queer people. Instead, I protected myself.

Sexual minorities need safe spaces — places people can go and speak their truth without fear of censor or self recrimination. Places that those with marginalized experiences can go where they won’t be offended or forced to educate people who make little effort to understand.

In addition to teaching “regular” writers, I teach writing workshops for writers whose voices typically have gone unheard. These workshops are places where drug users or sex workers, for example, can talk about getting high or turning tricks without others judging or re-centering the conversation on themselves.

I co-facilitate one workshop for LGBTQ teens. Many of these writers have been tossed out of their homes simply for being themselves. Our workshop is a place they can come to and feel welcome at, where pronouns are respected, and where no one is going to get hurt. It’s an incomparable feeling to be in a place where everyone is talking openly and honestly about who and how they love.

And now it’s come to our attention that the shooter used gay dating apps and pursued same-sex relationships. “A picture of a deeply conflicted individual emerges,” writes Muna Mira in this powerful essay for Teen Vogue.

Mira argues that, perhaps, there are no safe spaces for queer people — not really, not as long as the world outside these supposed “safe spaces” remains a threat.

Don’t get it twisted: What happened in Orlando was an attack on LGBTQ Latinx — a minority within a minority.

Hate hurts us all, but we don’t all receive it with the same systemic intensity. Those of us with the privilege to do so need to push against the borders of what is “permissible” in this society.

We need to challenge the idea of “normal” — rather than conform to it — so that all of us can live more closely to our truths.

To the individuals, families and communities affected by the tragedy in Orlando: the pain and fear you feel right now is real. Your outrage is justified.

All week long, all over social media, I’ve seen your hurt. And well before this, you’ve been hurting.

You are not alone.