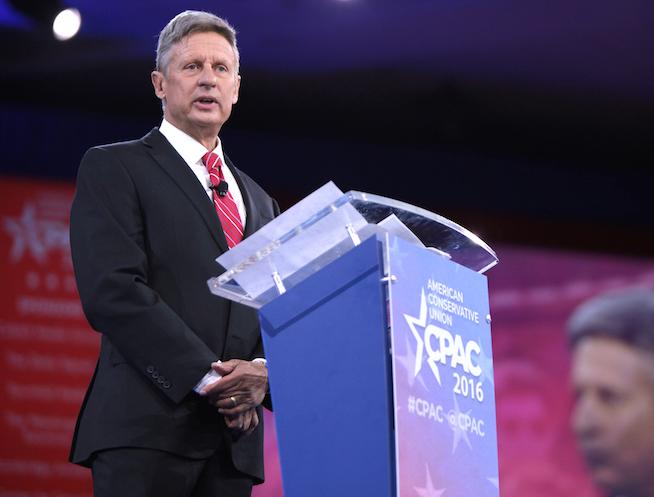 A recent poll found a whopping 58% of voters disapprove of their presidential choices.

Donald Trump is in trouble (perhaps legal trouble), yet again, over a remark yesterday that seemed to encourage “2nd Amendment” people to take a shot at Hillary Clinton.

“By the way, if she [Clinton] gets to pick her judges, nothing you can do, folks. Although the Second Amendment people, maybe there is, I don’t know.”

The Secret Service is aware of the comments made earlier this afternoon.

There’s your “Breaking News” from the malfunctioning Trump Train.

But beyond just Trump, the fact remains that many voters are not loving the Clinton/Trump binary choice this election.

A recent poll found a whopping 58% of voters disapprove of their presidential choices. The same poll found that both Clinton and Trump enjoy (ahem) under 50% favorability.

All this means that, for the first time since 1992, a third-party candidate has a very strong chance of impacting election results. And if something truly wild were to happen (say, no candidate broke the 270-electoral vote mark needed to win the presidency), then there’s an outside chance that a third-party could actually win the White House.

Here are the top three contenders, in order of popular support:

I once heard a television commentator say that embarrassed Republicans were prone to claim they were actually Libertarians.

This may be true, though on closer inspection, the two parties are at real odds on some issues — especially social issues. Johnson is personally opposed to abortion, but defends the legal right of women’s access to it. He supports marriage equality. Johnsons’s also all for legalizing cannabis, and dubs the War on Drugs an epic failure.

On economics, Johnson is like a Republican on ‘roids. He advocates abolishing income and payroll taxes altogether, shifting to taxes on consumption instead.

Libertarians tend to think government is pretty much always bad, so a Johnson presidency would all but guarantee a major ax to domestic spending. He’s also not keen on military intervention.

Johnson is currently the most popular third-party option, particularly among my fellow Gen-Yers. In fact, after Clinton, Gary Johnson is the 2nd choice of 18-29 year olds.

This may be due, in part, to Johnson being an open pot smoker himself. He famously “revealed” that he’s abstaining from cannabis use during his presidential run, so he can be “on top of my game, all cylinders.”

A quick look at the Green Party website reveals a few things: One, this is a party that believes in government. Almost all of their initiatives (10 Key Values) involve major interference from DC to upend what they view as a “corrupt system,” whether in our political processes or unsustainable business models in the energy sector.

To make all these major projects a reality, the Green Party has appropriated Bernie Sanders’ famous primary mantra: The rich will “pay their fair share.” With no details on their tax plan, it’s impossible to say for sure how the Green Party defines “fair share,” but I’m betting they’d have no problem with a 90% tax rate for certain brackets.

The second revelation is that the Green Party is hoping to absorb disaffected Sanders supporters. Like, trying really hard to bring them into the fold.

Jill Stein herself has an impressive resume. A former physician, she has spent decades trying to address the inequities she witnessed in children’s health, most stemming from economic hardship. She’s also worked on dozens of environmental and social justice issues.

The newest candidate to the 2016 presidential race, McMullin is a true “Independent” candidate, as he does not technically “belong” to any political party.

But he did work as an advisor to the House Republican Conference, so that gives you some clue as to his policy leanings. McMullin is also a former CIA operative.

On his “Issues” page, it’s clear that McMullin would be the most hawkish of any of the candidates running. Given his background working overseas, foreign policy seems to be McMullin’s primary focus. (He gave a harrowing TEDx talk on the ongoing genocide in Syria).

Though McMullin’s name recognition is currently basement-level, don’t be shocked if he gains in popularity. There are mega forces in the conservative wing of #NeverTrump, with money and connections, who align much more with McMullin than DJT. (Think Mitt Romney, Jeb Bush, etc.)

The question remains: Do any of these candidates stand a chance?

I don’t know. Probably not, but I would also say that is not the proper first question.

Instead, you might try asking yourself: Do any of these candidates better represent my views, my hopes for what our government should be?

The answer to that question matters. Super PACs and campaign spending will give this election a price tag north of one billion dollars.

Political strategists and donors don’t think your vote is cheap.

You shouldn’t undervalue it either.