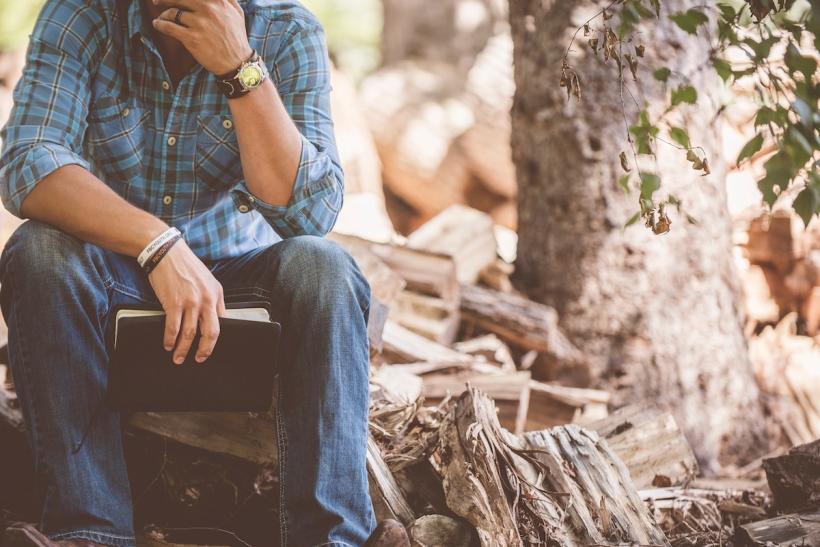 I grew up Catholic — real Catholic. I attended Catholic school for eleven years, and one of my favorite dolls as a child was the Esther doll I got at a religious bookstore. To this day, I have a real soft spot for Esther and Ruth (I had a Ruth doll, too), and those names are at the top of my Possible Baby Name list.

By the time I turned thirteen, I began to have what I like to call “managerial issues” with the Scripture. I cannot, for the life of me, wrap my mind around the concept of Hell. It’s ridiculous and antiquated. If God is real and using this cruel and unnecessary punishment, then I will have strong words for him at the pearly gates.

This was around the time that my Catholic school teachers began to tell us: “It’s okay to question… You should question.” I questioned. It was not well received.

I was unsure about my upcoming Confirmation, and I told my mother as much. She begged me to get confirmed, mostly to keep up appearances. She didn’t want me to upset my father’s parents, who were deeply devout. She knew that my refusal to be confirmed would ignite World War III in our house, which was already prone to less-than-diplomatic conflict resolution.

I consented… but only after my mother offered to buy me a new dress and shoes (I opted for tan sandals with pop out butterflies, something I saw as “classic” in the early aughts). I enrolled in Catholic high school. I spent two years at Benet Academy, where I learned that atheism was a pretty common side effect of sending your kids to parochial school. When my younger sister was allowed to jump ship and attend public school, I transferred.

“You better get up for Church,” was usually followed by my favorite, “Or you’ll find out how long a week can be!”

I was then as I am now: deeply agnostic, a term that delights me with its irony and which my mother can never understand. It’s like being steadfastly ambivalent or consistently inconsistent. Some jokes, I have learned, we make just for ourselves.

My father is a very Catholic man. This is not surprising, given that he sent his daughters to Catholic school. He is serious and devout. He is also the type of man who wished that he had had sons, though he’ll never admit it.

He woke me every Sunday morning in high school — I have never been and never will be a morning person— by yelling threats from the bottom of the stairs. “You better get up for Church,” was usually followed by my favorite, “Or you’ll find out how long a week can be!” This is preposterous. A week may feel long, but a week can only be seven days at twenty-four hours each day. It’s a finite measurement of time. (And now you know how difficult I was to parent.)

My father and I had a tense relationship during my adolescence, made even more tense when the subject of religion arose. He has never been someone with whom I could speak my mind freely.

Over the years, our relationship has improved because I have changed. My indignation at the world and his belief system have both mellowed. I have stopped asking him to change or to see my side, but we still do not discuss religion.

I would be happy to discuss my beliefs with my father. We are not so different. I attended eleven years of Catholic school, and while I disagree with much of it, there’s no denying that it played a huge role in the development of my moral code. I would love to be able to share my thoughts, my questions, and my qualms about the Church with my father. It would deepen our relationship, and we might be able to find common ground… or at least be able to respectfully disagree.

Except, that is not a possibility. The through line of my life has been the tension caused by my father believing that I should “fall in line” and defer to his patriarchal authority. Nowhere is this more evident than in the ways that he cannot tolerate our spiritual differences.

Any time I so much as suggest that we may have different views, I am berated. How dare I disrespect my father through independent thought?

The holidays have always been tense— my father suffers from “hosting anxiety” and becomes a bottle of nerves the day before Christmas. This manifests in an intense need to clean the basement. Like the whole Heaven and Hell thing, I have trouble with my father’s management style. There is a whole lot of yelling, and I have never cared for being scolded about things I haven’t done wrong yet. Over the years, I have learned to avoid this tumultuous time (thank you, Adulthood).

Last year, on Christmas Eve, I sat at my parents dining room table, wrapping presents with my mom. We were listening to carols, and I had poured champagne. My father, as per usual, came thundering up the stairs from the basement.

I needed to apologize. “You shouldn’t be disrespectful to your father’s beliefs.”

Would I go down an help him? He asked with that uncanny ability to make the question sound like a threat.

“Dad,” I smiled playfully, “I love you. I told you that I would go to Christmas Mass with you. I’m not religious, but I am going because it’s important to you. If you’d rather, I can clean the basement. Pick whichever one you like, but you only get one.”

I ruined Christmas with that statement. My father refused to speak to me after that, but made sure to walk in and out of the room so that I might be acutely aware of how much he was not speaking to me.

I am sorry that I upset him. I wish that he’d been able to tell me that I had, but he can’t communicate — another casualty of the patriarchy. In the end, it was my mother who communicated his mood to me. She, who had laughed at my original statement, warned me against being so disrespectful. I needed to apologize. “You shouldn’t be disrespectful to your father’s beliefs.”

I apologized because it felt easier and because, in the end, my relationship with my father is more important than being vindicated for the continuity issues in his speech — how is having my own beliefs disrespectful to my father’s?

I take great care to be respectful. I understand that our views are different. I have no interest in going to Mass, but I attend on the holidays because I love my father. And yet, I live in a world where doing something because I love my father is a crime because it is not enough. It is yet another example of the gilded cage we inhabit as women. Nothing short of total deference is enough.

If you like this article, please share it! Your clicks keep us alive!
Tags
catholicism
sexism
religion
feminism
Catholic school
Christmas
family