This Election Is Making Me Defend Hillary — And I Hate That 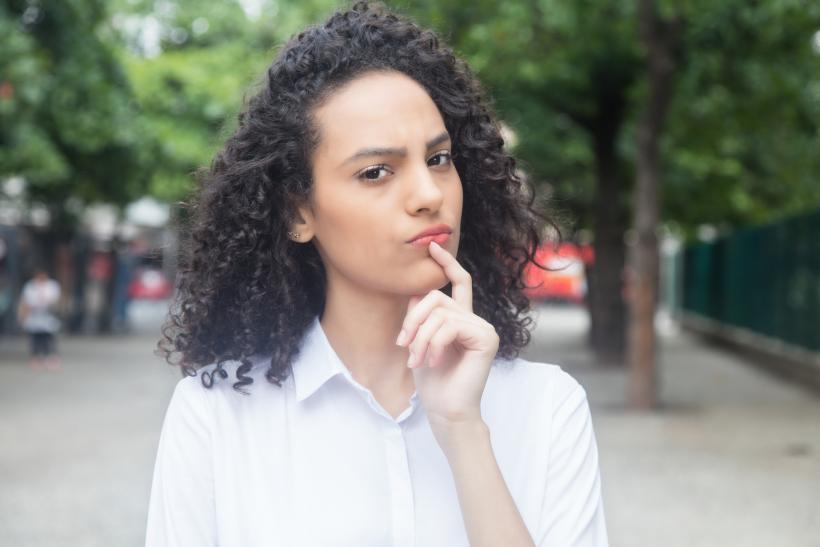 The Me of four years ago is shocked by this and doesn’t quite recognize the person she is staring at. Image: Thinkstock.

She doesn't inspire in me the same level of negative disapproval as her opponent — but she doesn't rank high on the scale of people I’m jazzed to vote for, either.

The Me of four years ago is shocked by this and doesn’t quite recognize the person she is staring at. Four years ago, Hillary Clinton was an automatic shoo-in for my vote. No doubt about it — the prospect of a woman president was (and still is!) extremely appealing to me. We're overdue.

Clinton comes with a boatload of experience in government at many different levels, and I would say she’s more experienced than most male candidates who have ever vied for the job. I love that I don’t envision her getting pushed around in any office by any man. She still very much appeals to me in that way.

But eight years ago, Black Lives Matter didn’t exist. Eight years ago, I perhaps didn’t review US foreign policy with as fine-toothed a comb as I should have. In my eyes, anything was better than the previous administration.

Eight years ago, I don't think anyone remembered the phrase “super-predators.” Maybe we were all just too eager to be rid of the administration of 2000-2008.

But now, with everything that’s happened in the interim, I don’t feel 100% comfortable voting for Hillary Clinton.

Now that I am fully in touch with the notion that my feminism is crap if it isn’t intersectional, I realize that being an intersectional feminist means standing up for the rights of all women… including women in countries that the US may shower with carpet bombs if our policies remain hawkish.

I don’t feel comfortable voting for anyone who treats Black Lives Matter like an “inconvenience.” Maybe the protests tripped her up… But in my opinion, they shouldn't have.

To me, engaging the Black Lives Matter protesters shouldn’t be that difficult. What we are asking for isn’t even a tall order.

However, all that said, the overwhelming and enthusiastic misogyny I have recently witnessed directed against Clinton is regularly forcing me to defend her.

I HATE THAT. It’s a weird burden to defend someone you don’t even feel overjoyed to vote for because you know she is being slighted, despite the fact that she is far from your ideal candidate.

Take, for example, this less-than-innocent bumper sticker I found adorning the vehicle of a business.

There is SO much to unpack here: 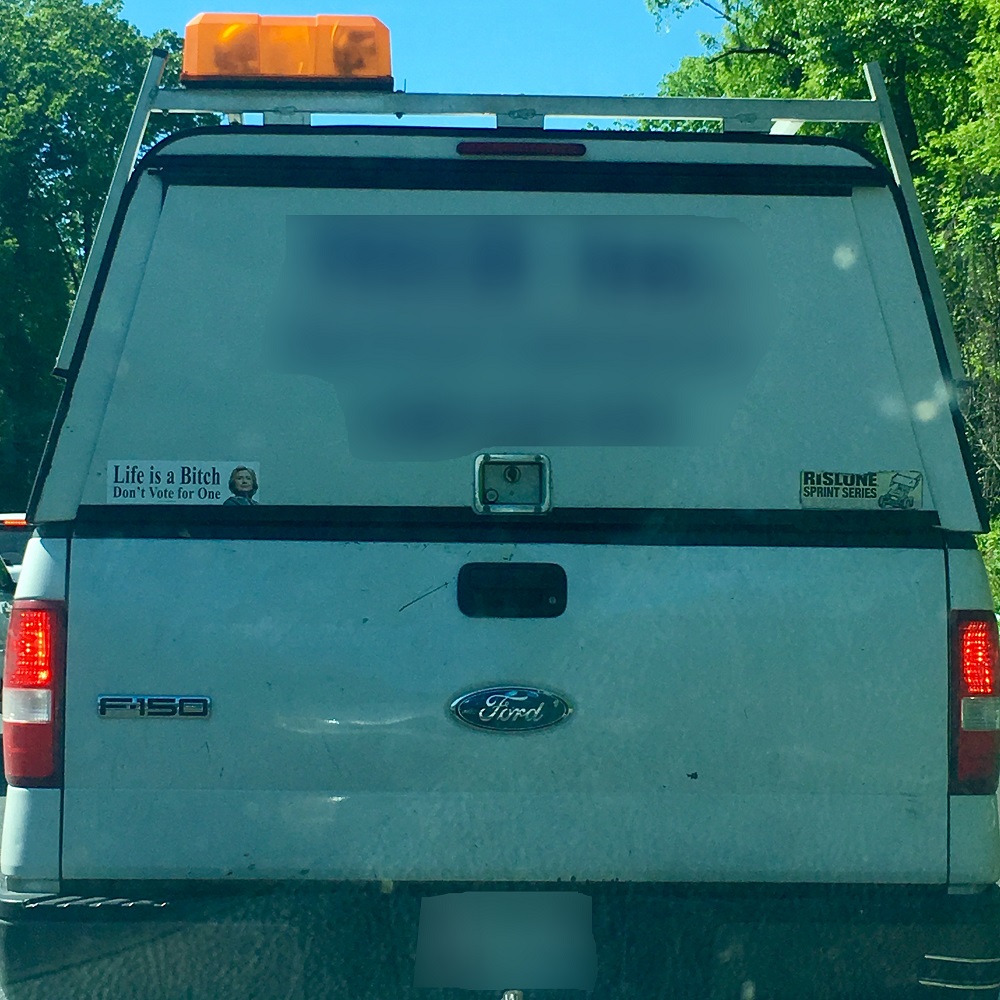 First off, how comfortable must you feel with your internal misogyny that you think it's appropriate to place a sticker as woman-hating as this, not just on your personal vehicle, but on your BUSINESS VEHICLE?

It is one thing to express your lady-hating ways privately (most people prefer to do their dirty work behind closed doors); it is quite another to drag your place of work into that nonsense.

But that’s the thing with misogyny, isn’t it?

It’s so insidious, and our society is so steeped in it, that those who aren’t trained to look at it closely would only see a bumper sticker with nasty words, not a bumper sticker that is deeply damaging to the female psyche.

Of course, I found the sticker so brazen that I had to snap a photo. It was the least I could do.

I may not be thrilled to vote for her, but I’ll be damned if I’m going to let the misogyny and toxic masculinity we fight so hard against control the campaign narrative of the first major woman presidential candidate.

People have always felt comfortable calling Hillary Clinton “a bitch,” whether it’s Newt Gingrich’s mother or the Facebook group dedicated to calling the lone lady politician in the Presidential race a nasty name.

Who paid the price for the videotape of Newt Gingrich’s mother’s foul mouth? Why, Connie Chung did! Because the best way to tell the world that you don’t support patriarchy is by firing the woman that exposed the name-calling.

Associating the lone woman in this race with nasty names comes as second nature to some people. It fits into the narrative like clockwork because degradation ranks high on the charts of power and control. Of course people love to describe Clinton also as “aggressive” and “bossy,” which are more key words to the road of woman-hating.

What is the male equivalent of “bitchy”? Oh right! There isn’t one.

Never in my life, in any Presidential campaign, have I found myself so actively defending a candidate that doesn’t wholeheartedly thrill me. It’s an inexplicable feeling, because I’m generally all on-board or not at all.

Name-calling may not be the same as physical violence, but it's a slippery slope. And it's all a part of the same culture.

What is the common denominator in the recent spate of mass shootings? The vast majority of the perpetrators are men.

A man in the United Kingdom took the life of the lovely Jo Cox (a well-liked liberal member of Parliament) while shouting “Britain First.” But because he’s white, the media was quick to refer to him as a “loner” with “mental health” problems.

Why not just call it terrorism against women? Because that’s exactly what it is.

As for Hillary Clinton, this entire election period has really left me feeling torn in the worst sort of ways. It would be like attending an all-you-can-eat buffet and finding the only thing on the menu is Eggs Benedict, when you happen to actually love eggs, but Eggs Benedict upsets your stomach.

I may not be thrilled to vote for her, but I’ll be damned if I’m going to let the misogyny and toxic masculinity we fight so hard against control the campaign narrative of the first major woman presidential candidate.

There are about a hundred different things you can criticize Clinton for as a leader.

Believe me, if I do vote for her, I’m going to hold her to a very high standard and I will NOT be silent about the things which worry me.

But taking cheap shots at her for being a woman is exactly that: A cheap, easy shot.

But more important — whether or not you choose to own up to it, you’re contributing to a deadly epidemic that makes the world unsafe for women.