"Your People," Donald Trump, And Today's Hot Mess Of A Press Conference 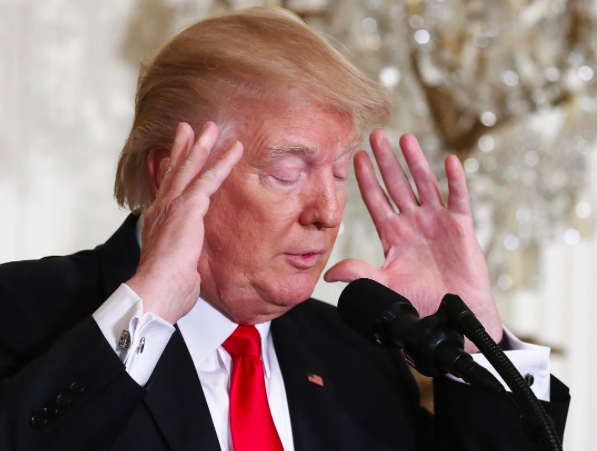 Throughout the election cycle, it became all too apparent to me that when Donald J Trump refers to the “inner cities,” he is mostly talking about brown and black people. Because in his eyes, all of us live in the inner cities. Never mind the fact that I grew up and continue to reside in a suburb of Washington DC. Never mind the fact that both of my parents have masters degrees and that my Dad received both of his degrees from Stanford University on an academic scholarship. Never mind that people of color live literally everywhere in this country. He still has it in his head that black people live in the rougher parts of our nation’s cities, so afraid to leave our houses because of gang violence that we often lock ourselves in for days at a time.

He actually said this, people.

It’s like he’s a regular 1980s news program about the War On Drugs (which was a deeply racist war at its very core — do a little internet digging on that and you’ll see the results). Ultimately these weird beliefs about minorities will continue to hurt people of color.

As I watched today’s press conference with our elected leader, the shock and awe campaign served one hit after another, as he pompously evaded answering any question and continued to prattle on about how he won the election and how everything is Hillary’s fault (and sometimes Obama’s fault). It’s hard not to take it seriously when the future rests on the shoulders of a man who seems to have an interesting relationship with the truth.

I watched again and again, as reporters asked President Trump news related questions, and repeatedly rephrased their questions, in hopes of receiving anything close to a credible answer. As he continued to discredit the press by telling them their questions weren’t “nice,” I felt more and more as if I was living in some bizarro universe where the President is actually a huge baby. Since when is it press protocol that reporters have to phrase their questions “nicely” for the President to answer them?

Since when is the President only allowed to call upon journalists who are “nice” to him?

But the real stunner for me, the absolute kicker, was when he called upon White House reporter April Ryan. He even insinuated, when calling upon Ryan during the press conference, that this would be a “bad” question. Now, this of course happened after he silenced a Jewish reporter for merely asking how this administration planned to battle the rise of antisemitism. Harmless question right? Not a “nice” one according to our President.

A little bit of backstory here about April Ryan. CNN reports that just one day ago, April Ryan, a reporter for American Urban Radio Networks, got into a bit of a scuffle with administration communications official Omarosa Manigault. (That’s Omarosa pronounced like “Oprah” not Ah. I know this because I worked with her once and she snapped at me. That reality television rudeness isn’t as much of an act as you’d like to think it is). Ryan claims that “Manigault had physically and verbally intimidated her and claimed that the White House had 'dossiers' of negative information on her and other journalists. (Ryan also made these allegations to The Washington Post earlier.)”

Manigault shot back that Ryan was “lying” because she had a tape of the interaction. (It is illegal to record someone without their knowledge, but with this administration, that’s neither here nor there!)

Ryan’s question didn’t allude to any of the backstories of her trials inside the administration. But, the President was more than happy to do that himself.

Ryan only asked, “Are you going to included the CBC (Congressional Black Caucus), Mr. President, in your conversations with your urban agenda, your inner city agenda … as well as …”

And then he cut her off with, “Am I going to include who?”

“Are they friends of yours? Set up the meeting," he demanded.

Not seeming to hear that Ryan has no interest in setting up a meeting between the President of the United States of America and the Congressional Black Caucus — because, well, she’s a reporter, and she doesn’t WORK FOR HIM — he then went off on a tangent about how he tried once to set up a meeting. This is low key how I feel when FB commenters demand that I explain some really simple concepts on race to them. If I do it, I’m doing you a favor. But no one who doesn’t work for you owes you an explanation about anything — especially when you can do it yourself, whether it’s reading up on race and knowing fact from fiction, or demanding that a black reporter set up a meeting between you and the Congressional Black Caucus. Not her job, mind you.

I can’t state this enough. ALL BLACK PEOPLE DO NOT KNOW EACH OTHER. Even in D.C.

Trump made that classic move that old white dudes sometimes do where they act like everybody works for them. I’m sure some people will get their knickers in a bunch over that, but it’s true. I can’t imagine asking someone to set up a meeting for me that casually —as if they get paid to assist me in any way.

At the end of the day, our President has been given yet another fine opportunity to prove that he is out of touch and ultimately holds some weird racist beliefs, all while insisting he’s the least racist person you’ll ever meet. FUN.