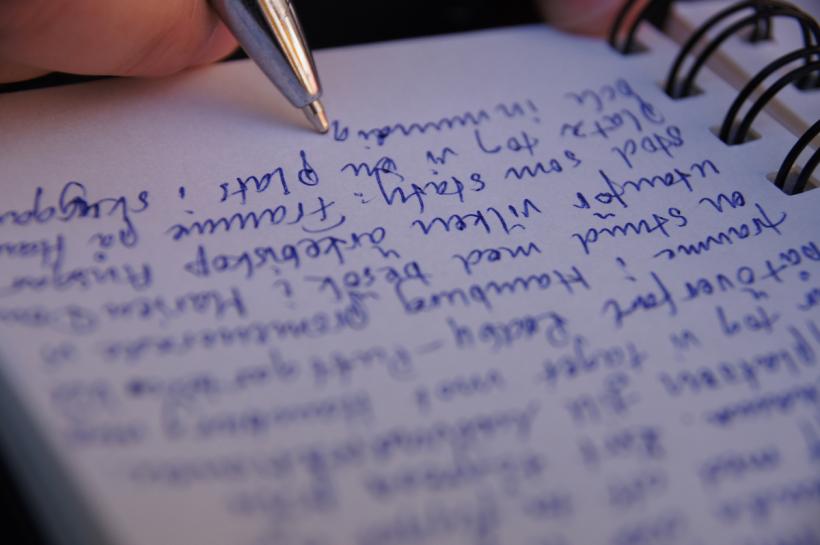 Your only audience is yourself, so there’s no need for a thesis or any particular coherence. (image via Flickr- Fredrik Rubensonn)

Keeping a diary is usually the realm of the young and hormonal. There’s nothing so delicious as scribbling down your feelings in letters made spiky with rage or loopy with lovesickness. Once you get to be an adult and hormones loosen their stranglehold on your brain, however, keeping a record of your daily life usually falls by the wayside — unless you’re a writer, taking part in a short-lived New Year’s resolution, or live the kind of dramatic life that demands immortalization in print.

Like every other kid who expressed a vague interest in writing, I was gifted a new journal for each special occasion. Despite valiant attempts to fill their pages, I never managed to make it to the last page — not even in my favorite of the bunch, which had thick, cream-colored pages I loved to smell. By the time I graduated high school, any semblance of organized journaling had tapered off. Between attending college and working three jobs, it wasn’t high on my list of priorities.

The act of writing for myself — not for work or as a creative outlet, but just to gather my thoughts — felt so cathartic that I did it again the next day. Then the day after that, and the day after that as well.

Then came 2016, the kind of year that would tempt even the most grounded person to reevaluate their stance on curses. Despite all the hyperbole found on social media, it wasn’t actually the worst year in history, but it was certainly difficult on a personal level.

I’m not going to pull out a list of grievances, but suffice it to say the lowest point came early on a Friday morning in September. I woke up gummy mouthed and puffy-eyed, with the kind of clear sinuses that only occur when you’ve cried out more mucus than your body can produce. A specific hurt emanated from what turned out to be a lump hidden just at the edge of my hairline. When I twisted to swing my feet out of bed, I discovered that my side was wallpapered with bruises so dark as to be nearly black in places. Still fuzzy with sleep, the events of the night before were a jumbled mess of flashes. Staring at a plate of sushi while conversation ebbed and flowed on either side. Clambering to my feet in the middle of the road with my best friend. Swapping cosmetic tips with a woman in line for the bathroom.

I heard my roommate shuffling around in the kitchen on the other side of my bedroom door, so I grabbed the nearest half-filled notebook and struggled to make sense of what happened the night before. Research has shown that using pen and paper helps boost a writer’s recall, and that’s exactly what happened — I was able to put my muddled thoughts back in order.

(The events of the night aren’t the point here, but in case you’re wondering: Mired in the middle of a depressive episode, I had forced myself out of the apartment to watch a football game with friends. Around three hours in, my mood took an abrupt and public nosedive. Sometime between ordering food and its arrival a few minutes later, I burst into the unattractive, gulping kind of tears best reserved for being alone in the shower. My best friend decided to give me a piggyback ride to cheer me up, but unfortunately, she forgot that neither of us is particularly sure of foot. We wound up falling off the sidewalk into the road, which is where I acquired all those bruises and the killer headache. Fun times.)

It wasn’t a particularly bad night when viewed in the light of day, but the whole “uncontrollable sobbing in public” business served as what some would deem a wake-up call; it was long past time to see a therapist.

Meanwhile, the act of writing for myself — not for work or as a creative outlet, but just to gather my thoughts — felt so cathartic that I did it again the next day. Then the day after that, and the day after that as well.

In the intervening time, I’ve written in a journal more days than not. There’s never any particular theme, although I do tend to write more when something is troubling me. Once, I made a list of songs that sound like the inside of my head; another day, I wrote a love letter. I don’t stick to a schedule because it would just stress me out, but after a few weeks, keeping a journal has become an especially calming habit — one I plan to continue for the foreseeable future.

As someone whose livelihood depends on writing, the lack of expectation is freeing.

Your only audience is yourself, so there’s no need for a thesis or any particular coherence. Most of the time, rambling is just rambling, but every once in a while, I’ve noticed a theme emerge from the scribbles. (The first lesson I learned? Leave all the references to indie bands for teenagers.) Ultimately, that’s the draw of keeping a journal: If you do it long enough, you’ll learn something new about yourself. I’m looking forward to whatever else turns up in the corners of my mind.

If you like this article, please share it! Your clicks keep us alive!
Tags
journal
journaling
writing
self-care
diary