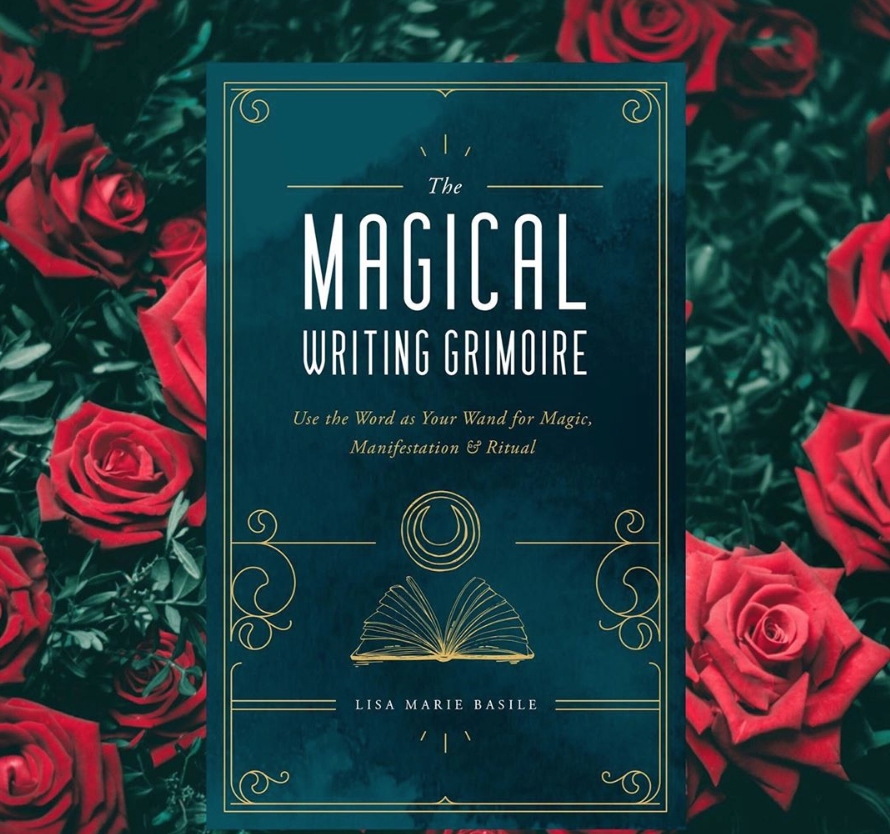 WHAT IS THE MAGICAL WRITING GRIMOIRE? IS IT FOR WITCHES OR WRITERS — OR BOTH?

The Magical Writing Grimoire is a book of inclusive and accessible rituals and writing prompts for anyone who feels called to using words as a source of healing, empowerment, joy, generativity, and self-exploration. It is designed to integrate ritualistic living and to incorporate sacredness into our lives in meaningful and easy ways.

It’s for witches and non-witches (including people with secular beliefs, like myself), although of course it’s heavily based off the archetype of the witch: The witch, to me, is strong, rebellious, empowered, empathic, and bold as fuck. The witch is also conscious — of the self and others and the earth. So, it works heavily with archetypes and symbols, but it invites people who have specific beliefs to incorporate their beliefs into the work.

Really, the book is about tapping into and using your own power, your own voice, your own ideas.

It’s for writers and non-writers — anyone who is interested in the sacred, beautiful power of poetry or journaling or letter-writing, or timing writing practices to nature’s ebb and flow.

It also focuses heavily on shadow work — or unearthing the silenced, dark, shadowy parts of the self.

WHAT WILL READERS FIND WITHIN ITS PAGES?

Lots of rituals, lots of writing prompts, meditations, quotes from the most inspirational and wonderful people and writers, poems I wrote myself, glimpses into my personal life, and so much more. Plus, it’s really beautifully illustrated.

WHAT IS THE INSPIRATION BEHIND THE MAGICAL WRITING GRIMOIRE?

The book was gestating in my mind for several years, but I didn’t know what its shape until the past year or so; I knew I wanted to write a writing guide — one that balanced the ritualistic with the pragmatic and every day, one that used writing as a form of magic. More than using the occult in order to generate writing, it’s about using writing to make your life more magical.

It’s deeply rooted in recovering from pain and trauma. When I was younger, the number one thing that got me through times of extreme trauma (family separation, foster care, CPTSD, financial instability, chronic illness) was writing. Writing gave me my voice back. It was a tool for reclamation. But more so, it was a tool for joy, creativity, and empowerment.

The ability to write is a privilege for many of us, but it’s also a free tool that can help save us. I’ve seen writing help women in domestic shelters, college students move through self-esteem issues, and incarcerated individuals tell their story. It is something sacred in itself because with our words we are taking nothing and making it into something.

So I wanted to design a gentle but effective book that people — especially any marginalized community — could use to tap into their truth and self, in a way that felt right for them. It’s guided, but it allows space for reinterpretation and individuality so that anyone can tap in.

IS IT SIMILAR TO LIGHT MAGIC FOR DARK TIMES?

It is, and it’s not. Like Light Magic for Dark Times, it is grounded in accessibility and inclusivity. It also offers different (but looser) chapter focuses, like manifestation, mindfulness, healing, conjuring your voice, creating a grimoire, and more.

Unlike Light Magic for Dark Times, it provides a much deeper dive in terms of the rituals and the writing prompts, and it’s filled with poetry and quotes to meditate on. It’s also much more about the process of long-term self-exploration (and excavation!) than about quick, one-off rituals for different purposes. I think the two actually pair super well together!

WHAT ARE YOUR BELIEFS?

I’m secular (for lack of a better, more nuanced word), so I don’t work with or believe in gods, goddesses, angles or other deities. However, I work closely with the natural world (especially the power and energy of water), shadow work, energy, archetypes, and symbols. For example, I see the elements as powerful tools, offering lessons and glimpses of the purity of aliveness — and I see the astrological signs as symbols of the human condition.

WHEN DOES THE BOOK COME OUT?

It’s born on April 21, so it’s a Taurus! But let’s be honest — it was finalized and sent to the printer during Scorpio season. It’s very much a Scorpio book — it’s dark, intense, powerful, and transformative. But, like a Taurus, it wants to find beauty, comfort, and artistry. And because it comes out in the Spring, it’s a great way to kick off the new year with energy, creation, and rebirth.

People are already saying some really kind things about it, and it’s included in a few Most Anticipated lists, like in Cunning Folk and over at Patheos by Mat Auryn.

if you do, send preorder proof of purchase to magicalwriting@quarto.com and you’ll receive downloadable prompts and magical poetry to power up your magic.