Should I Be Paying Attention To Matcha? 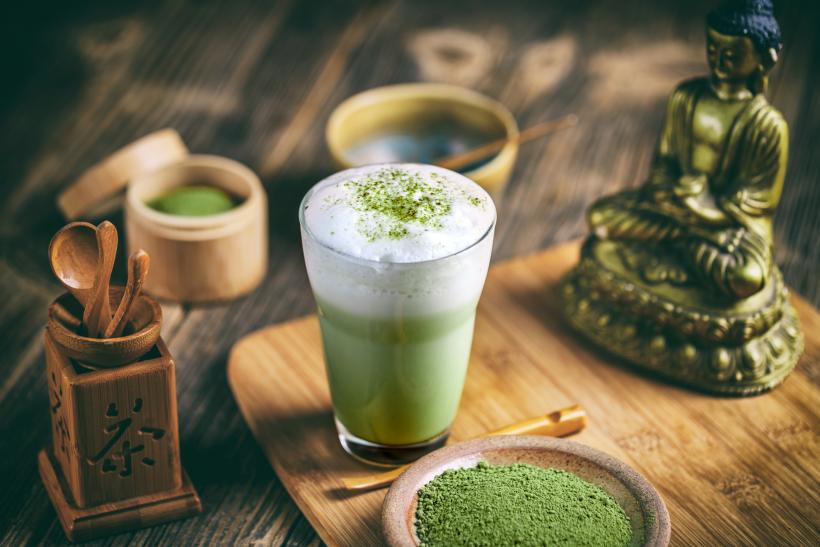 Matcha is all the rage, and for good reason - it packs a healthy, energy-fused punch.

Suddenly everyone at the coffee shop is sipping on a mysteriously bright green beverage (and instagramming its beauty in the process). Matcha seems to be popping up on every cafe chalkboard in the neighborhood, and so far all you can tell is that it appears unnaturally colored and unnaturally expensive.

So what exactly is matcha?

Matcha is technically a stone-ground green tea powder. An honored Japanese tradition for centuries, matcha is considered one of the highest quality forms of green tea on the market. If you decide to actually take the leap and order matcha the next time you see it, you’ll be getting real green tea leaves milled into a fine powder (versus the more traditional green tea, which is just leaf pieces in a tea bag that’s dumped into hot water).

Sounds simple, but it’s not at all. When matcha arrives to you in a mug, it’s been de-veined, de-stemmed, ground by stones, and hand-whisked by some artsy baristas. The solution is even whisked up with a special bamboo brush for that frothy goodness. Part of the reason it’s so pricey is because of the extra effort involved in making it. (But maybe also because too many hipsters are pairing it with their fancy hats and delicately knotted handkerchiefs).

Like a lot of hip trends, matcha-making is all about the gear. A chawan, aka the tea bowl, is used to both make the matcha and drink it once it’s made. A chashaku, or a bamboo tea spoon, is your official matcha scoop. And don’t forget the chasen, a tea sifter to de-clump and remove any static from the tea. Phew. At this point, you’re probably hoping this stuff has some serious caffeine in it because you’re wiped just hearing about the process.

So is this stuff actually healthy? Here are some of the purported benefits of this fancy beverage:

Matcha is supposed to be a majorly helpful way to calm the mind and initiate a relaxed yet alert state. Traditionally consumed for meditation purposes, matcha does the trick with a little amino acid known as L-Theanine, which mellows you out without making you drowsy.

That aforementioned amino acid found in matcha does more than calm you, it also increases the production of dopamine and serotonin, which means your mood is boosted, you’re automatically in the focused zone, and your memory’s gears have magically started turning once again. Great for “helping” your kids with their impossible math worksheets after dinner when you just want to get in the bath and watch your stories.

Antioxidants are so hot right now because they fight UV radiation side effects, which means you get that youthful glow without having to transport yourself back in time. Even more crucial is their preventative powers. Antioxidants can help you ward off many severe illnesses, including several forms of nasty cancer and even diseases like Type II Diabetes. Fortunately, matcha is full of these microscopic superheroes.

You heard right: this liquid gold burns calories and increases your metabolism. Burning fat will soon be added as an official skill on your LinkedIn page once you’ve gulped your way to those pre-baby jeans.

Sure, the caffeine in matcha doesn’t hurt, but actually, a lot of the boost in energy that you feel from sipping this tea actually comes from a combination of the right kind of nutrients. And it’s a slow burn, so that energy can translate to endurance, and you can actually make it through the week in one piece.

The same element that makes matcha almost glow-in-the-dark green also makes it capable of knocking out harmful body toxins. After you’ve downed the whole mug, matcha gets to work on cleaning out your insides.

In the family of flavonoids, a little something called Catechins found in this green tea elixir help lower LDL cholesterol, which decreases your blood pressure and reduces your risk for stroke.

You can drink this stuff hot or cold, and people are starting to get way more creative than that. Look for matcha-infused cocktails, lattes, amuse-bouches, and even altered recipes of your favorite desserts. I mean, let’s be real here, who doesn’t want another excuse for boozing and eating sweets? This stuff is supposed to be healthy, right?

Side note: Matcha may be a little too good. After spouting off all those benefits, I’m also telling you that you need to consume this stuff with caution. Green tea in all its forms has the potential to contain trace amounts of lead and fluoride. Your basic bagged green teas knock out this concern by nature of the brewing process. However, since matcha isn’t created the same way, it could still contain small portions of these harmful substances.

So avoid drinking matcha while pregnant and maybe don’t chug the stuff more than water and you’ll probably be fine.

So yes, you should be paying attention to matcha. Whether you choose to drink it or not, it’s certainly causing a stir. Though it’s been around for hundreds of years, people on this side of the world are just starting to take notice of it. Better late than never to the healthy tea party, I guess.

If you like this article, please share it! Your clicks keep us alive!
Tags
matcha
tea
health
energy
green tea
self-care
beverages