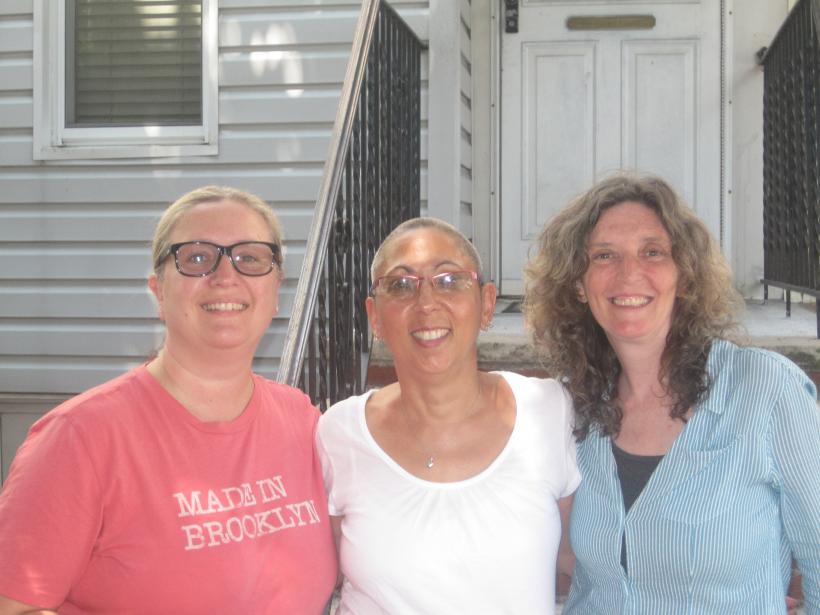 The writer, middle, with her friends Maureen and Janet

"Why do I get to be 'Cancer Girl?' Why couldn't I have gotten a good diagnosis?"

I was waiting on pins and needles to hear a good friend's prognosis. Julie had a large uterine tumor and her medical team prepared her for the worst; the mass didn't present itself well. She tried to steel herself for a cancer diagnosis. But it turned out that Julie's more than 11 ½ pound growth was benign.

While I was of course thrilled for Julie, a tiny voice inside of me sobbed: "Why do I get to be 'Cancer Girl?' Why couldn't I have gotten a good diagnosis?"

Two years earlier, I learned that I had Stage 1 breast cancer. Not one, but two types: invasive carcinoma and ductal carcinoma in situ (DCIS). My immediate future involved a mastectomy, emergency surgery when the reconstructive tissue expander went wrong and gave me a horrendous infection, and three months of chemotherapy that left me bald, aching, and exhausted—but cancer-free.

So, while I was elated Julie didn't have to face the ordeal that I had, I asked my husband why couldn't I have been so lucky.

Peter responded with a huge bear hug. "But you are lucky," he whispered into my neck. "You're still here."

At first I thought, "Yeah, still here to do your laundry and cook for you," but I knew exactly what he meant: I was still alive.

A slightly bigger voice drowned out the tiny voice in me. "Somebody has to get cancer," it told me. "Why not you?"

A recent study showed that the cancer card is pretty much the luck of the draw. It found that getting cancer has less to do with what you do and more to do with chance (random genetic mistakes or mutations) and simple genetics. People who don't smoke and have vegetarian and macrobiotic diets get cancer as do people who drink like fish and smoke like chimneys.

The National Cancer Institute estimates that one in two men and one in three women (or 40.4%) will get cancer in their lifetimes. If the odds are like Lotto or Powerball, then why couldn't I be a scratch-off millionaire?

But in a way, I have won the lottery. Women I know aren't quite so lucky. Women I know with early diagnoses similar to mine are battling reoccurrences of breast cancer that were rediscovered in Stage 4. They've tried trial drugs, done rounds of chemo, and nothing seems to work. They are bad-ass warriors who still haven't given up hope. Because without hope, what else is there?

In light of this realization, a still bigger, stronger voice inside told me that maybe my mission was to be a cancer ambassador.

Weeks after my 2013 diagnosis, I began going to SHARE meetings, an amazing support group for women with breast and ovarian cancer. When my chemo was over, an interesting thing happened. While I kept going to SHARE for a "fix," my role slowly evolved from supported to supporter.

Without realizing it at first, I somehow transitioned into being a mentor. Friends down the street and across the sea started asking me to talk to others who'd been sideswiped by life-changing news. Sometimes it wore me down. Sometimes it gave me flashbacks. But I was always willing to help someone. I felt it was my obligation as a survivor.

Truthfully, I don't mind being a breast cancer "go-to girl," even for people I don't know. When I noticed on Facebook that the wife of a guitarist whose music I love was diagnosed, I joined "Melissa's Healing Hope," her online blog. I tried to add uplifting remarks after her posts. One day, there was an email from Melissa herself with the message header: "When does the worry stop?" I answered as openly as possible. I told Melissa that I don't imagine you ever stop being concerned about recurrence but eventually, the business of living trumps worrying.

A few months later, there was a phone call from my cousin with vague breast-cancer questions. At first, I thought Elaine was inquiring for a colleague until it became clear that she was speaking for herself. "I found a lump . . ." Elaine told me. I listened. She asked. I answered. I was there when she was sleepless, IMing at 12 a.m. I was there when she was groggy in recovery after her lumpectomy. I was there, texting during her chemotherapy treatments. And I'm still there.

At SHARE's last holiday party, Gina, who's dealing with chemo and lymphodema, admitted, "Seeing you at meetings is such an inspiration." I was so touched that I was speechless. I was just stumbling along like everyone else, wasn't I? Just pushing ahead because what other choice do we have? But then it became clear that I was the light at the end of the tunnel-proof that there was indeed life after cancer.

At this point, I'm not exactly sure where I belong. It's not easy slipping back into the workforce after reducing my hours to give myself time to heal. But post-diagnosis, I try not to stress over the small stuff—and compared to cancer, it's all small stuff.

Maybe I have a different job now. Instead of crafting vapid CEO speeches for Fortune 500 companies or being all rah-rah over a new employee resource group, I get to write about important issues like this for Ravishly.

Maybe being "Cancer Girl" isn't such a bad thing.

If you like this article, please share it! Your clicks keep us alive!
Tags
Cancer
survival
advocacy
support
writing
chemotherapy
life
Creative Community