My Divorce Ensured I Would Never Marry Again 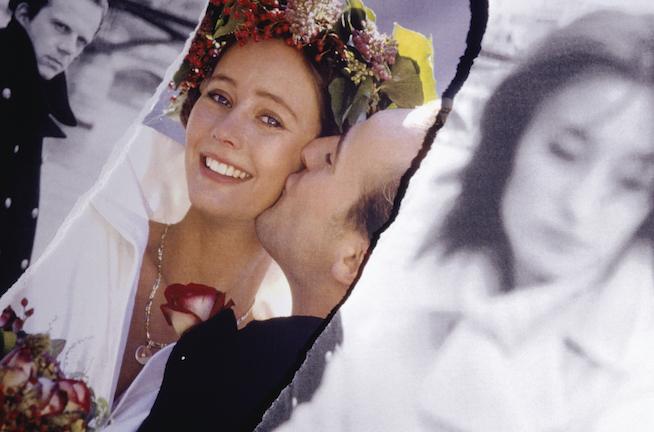 Sometimes the best thing is NOT having something.

I regret nothing, and still feel cut off at the knees, forced to crawl through life where most walk, and some even run.

I walked away from two long-term relationships (and two picked-out-but-not-purchased engagement rings) because of my resolve that I would only marry once.

Then I met my future husband John* in the course of my internship at his publishing company. He was 11 years older, my supervisor, and also happened to be living with his girlfriend of five years. The circumstances weren’t auspicious, but something genuine blossomed out of the tumultuous affair. And eight months later, while dancing to Ishmael Herring’s “My Woman and Me” in front of the town’s gazebo, John slipped an antique pearl and sapphire ring onto my left hand, and asked me to marry him.

Within two years, we married in Las Vegas. Ten months later, I left our marital home with nothing more than could fit in my little car, just as committed in that moment to ending our union as I had been to eternalizing it almost a year ago.

There aren’t words to describe the overwhelming, all-consuming pain of such a decision. Sometimes, a memory will come to me — something as large as a moment from our Costa Rican honeymoon, or as small as his signature furrowed-brow face in photos — and any semblance of happiness in my new life will be overtaken by loss that reduces me to ugly, snot-ridden, body-shaking tears. In such times, there is nothing to be done but curl into the smallest, tightest ball and wait for breath to find me again.

Even filing the paperwork to commence our official divorce has been traumatic. In spite of my absolute conviction that we could not continue in our life together, I avoided it for months, finger shaking on the metaphorical trigger.

My soon-to-be ex-husband is a good man, and I wish him every good thing in the remainder of his life. I hope, most of all, that he avails himself of the notion that I’m the love of his life sooner rather than later. I regret nothing, and still feel cut off at the knees, forced to crawl through life where most walk, and some even run. I cannot imagine how he suffers — most of the time I try not to.

In spite of this, I have made a life for myself that includes love. It is new, unconditional, and honest.

Christopher* and I have been close friends for 10 years, which makes it easy to talk about almost anything: our thoughts on home ownership (solidly negative), proclivities in porn (varied), whether or not to have children (potentially one, several years down the road), and even my divorce (it’s a shame that it hurts me, but otherwise not a problem). Christopher held my hand and kissed my eyes when writing this piece brought me to tears. He wraps me in his arms when I fall into the memory pit, and he tells me that it’s OK to feel the way I do, and that none of it will scare him away or make him love me less.

We even talked about a life without one another, something that, after all this time, feels impossible. We made plans for me to move to Boston this spring, and sometime after we’ll move in together, adopt 20 cats, become two work-from-home writers, and try our best to be happy until we grow old and die. We’re agreeing to move forward only when it feels completely comfortable for us both.

The only thing that is completely off the table for us is marriage. I love Christopher. I want to share my life with him. But I remain firm in my promise to myself: I will only marry once.

Marriage, even when I was happy within it, did not in and of itself make me happy. Changing my name on Facebook was a thrill, as was using the word “husband,” but the nature of my relationship with John didn’t change. The only noticeable difference between engagement and marriage was the way we filed our taxes.

But breaking apart this marriage has been hell. Most of all, I feel guilty: We took vows of a private nature in a public venue, and then undermined the most fundamental of them: as long as we both shall live. There is the constant pull between knowing that I’ve made the right decision, and feeling that I failed — simply because I was someone’s wife instead of their significant other.

I want to commit to my relationship with Christopher, and recommit to it every day. I want our biggest relationship decisions to be whether to live together, start a family, or travel the world. I want this feeling of compatible bliss to last forever, and I’ll work my hardest to see that it does. I've promised him that. I've promised myself to learn from my pain. I've made him promise to never ask for my hand in marriage.

If you like this article, please share it! Your clicks keep us alive!
Tags
divorce
Separation
getting divorced
marriage