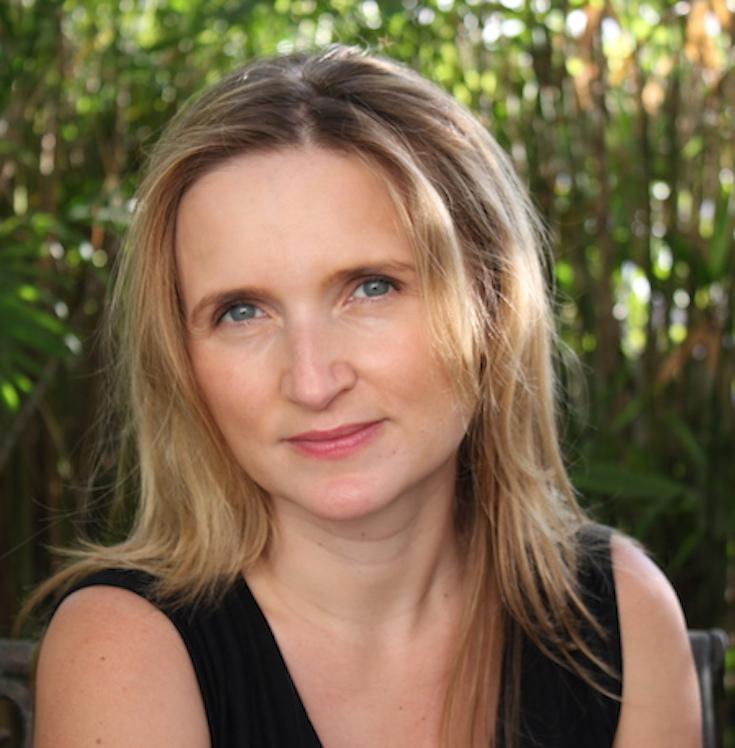 Last month, with only days to go before the birth of her son, Eleni N. Gage, author of the recently published Ladies of Managua and editor of Martha Stewart Weddings magazine spoke with me about her latest novel, what it takes to be a Harvard-trained folklorist, and the importance of maintaining rituals in the modern world.

Let’s start with The Ladies of Managua. The readers meet three generations of women who return for the funeral of the man who held the family together, Maria’s grandfather. Each woman has a secret that is eventually unveiled and forces them to face their complicated relationships with themselves and each other. On the surface, the book seems to be about Maria, but in reality, the main character is her grandmother, the newly widowed Isabela. What inspired you to write from three different points of view?

I really like writing about older women. In my last novel Other Waters, I enjoyed writing about the mother the most. I could hear her voice loudest. Here, the inspiration came from my Nicaraguan husband’s grandmother who attended convent school in New Orleans in the 1950s. While there, she fell in love with a Cuban and planned to run away with him, but they didn’t. That’s where the similarities end. That generation of Nicaraguan women saw so much change — I thought about these women who went to convent school and learned how to get in and out of cars gracefully and became pillars of society. Universally, as women, we’re always looking around trying to figure out the rules of society, and in many cases, it’s women who are upholding those rules.

In college I studied folklore and mythology, and I learned that it’s usually the women who do the kin work — all the minutiae involved in keeping up family relationships, holding events, and making sure rituals happen. I think that women get to a point where, just as we’ve figured out all the rules, society changes.

So how do women of a certain age cope? In the book, Isabela assumes that people looking at her see someone who has always been old.

In other people’s eyes, Isabela has always been an old woman. But no, to get there she had to do all the things younger women are doing. Women adapt, or become a relic.  I love writing from the point of view of women of a certain age because they’ve seen so much and they contain so much inside them, not just social history, but their personal history. There’s still the little girl or the high school girl inside, you just have to scratch the surface a little bit.

The descriptions of the countryside are magical — were you living in Nicaragua at the time?  Were you working at Martha Stewart Weddings yet?

At the time, I was freelancing and we were in Nicaragua for my husband’s work — he’s a coffee trader — and we lived in Granada. I already had about fifty pages when we got there, I had the idea, and then I got into this routine where, my daughter Amalia would nap for a few hours in the morning and I would work on the book. In the afternoon we had really great, really cheap child care, and this wonderful lady would come in and take Amalia to chase the turtles and parrots, and that’s when I would work on my freelance stuff. Just living there, inspiration was all around me. It was like a magical realism, but in Nicaragua, it’s just realism. It’s crazy! I remember going to the drugstore and looking out the window at people carrying a big figure of Jesus down the street for a religious festival. Monkeys in trees, lush landscapes, that’s just how it is.

Do you speak Spanish?

I do, though not as well as I’d like. I can understand it very well and I can get by, but I know how much I don’t know! So I’m a little shy.

Did you become part of the community while living in Granada?

In my travel memoir, North of Ithaka, I wrote that Greece is not for spectators. It’s the same in Nicaragua. You just get drawn in, and I like that. Emilio went into Managua every day to work so I would push my daughter’s stroller around the town and visit the markets. One day I went to run errands without Amalia and a group of kids across the street called out, "Hey, look, she forgot her baby!" You’re just part of this community, which feeds what I do — writing about people and their interactions.

Both Greece and Nicaragua are really rich in folklore and ritual, which was my college major. 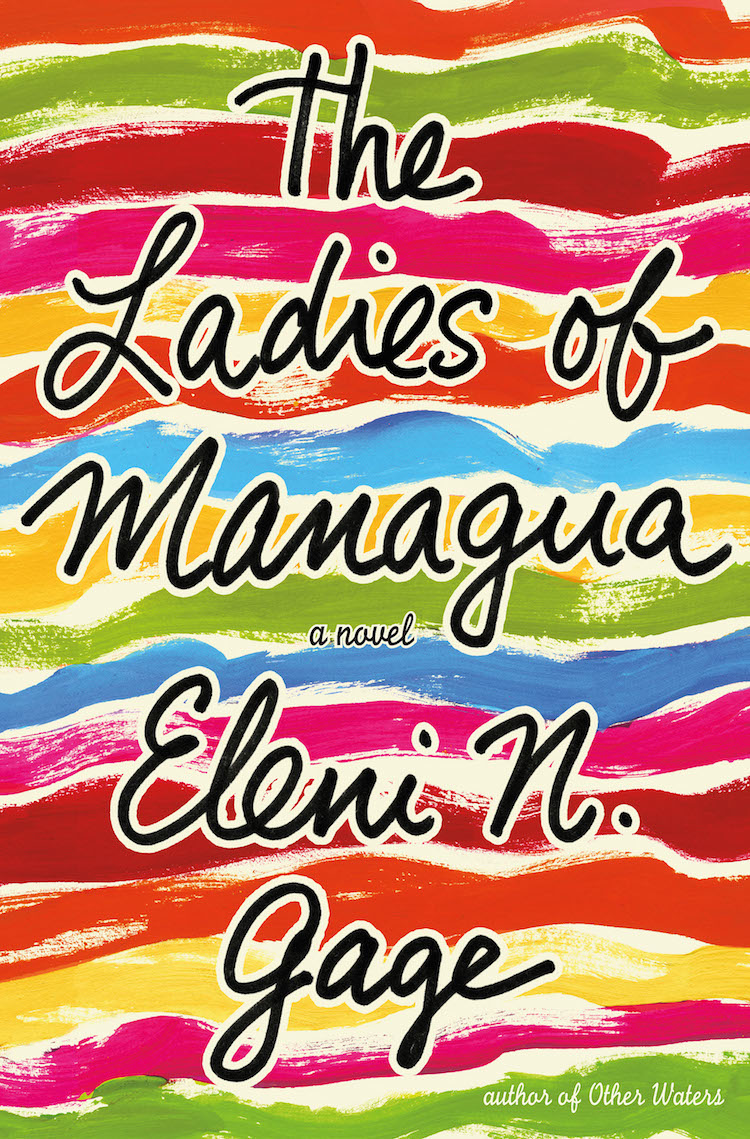 What drew you to majoring in folklore?

My family moved to Greece when I was three, and when we came back, there was still a large Greek community all around us. But my mom is not Greek, so she would always point things out if something was interesting and different, and I might have taken it for granted if she hadn’t. So I’ve always been trying to figure out how society works. I think that’s what drew me to the major. I didn’t know it existed when I got to Harvard, but it allowed you to study a lot of foreign languages, to read a lot of literature in those cultures, and to design your own curriculum. It was great preparation for journalism because our papers were ethnographies where you chose a community and wrote about it. The interest has never left me, and it informs everything I write.

What kinds of rituals cross cultures?

We develop rituals around liminal stages (the word liminal comes from the Latin word limen for threshold), and we build rituals around transitional moments like birth, weddings, and death, mostly because they produce anxiety. The ritual calms us and gives the impression that we have control over what’s going on, and give us something to do with our time. I even created a blog called “The Liminal Stage” with the tagline “Navigating a modern world with the help of time-tested traditions.”

The evil eye superstition is everywhere. In Italy, it’s the mal occhio, in Jewish tradition you fight the evil eye with red, and in middle eastern cultures you fight it with blue. You’re fighting bad feeling and jealousy. For example, after Greek well-wishers praise a newborn, they spit on the baby to counteract those words because they don’t want to tempt fate. It’s the same as when someone says they’re up for a new job and they don’t want to tell you because they don’t want to jinx it. No one can control it — you feel lucky about your life, and you might think it could go away at any second.

Is it possible to have too many rituals?

I suppose some would say that’s what OCD is. People who have to touch 47 knobs on their way home are trying to control their world by having these rituals. When you get into magical thinking and superstition, where things are used to enforce cultural norms, then ritual can be oppressive.

You must have a lot of cross-cultural rituals in your life now — Greek, Nicaraguan. What’s it like to balance them?

It’s part of my personality. I love tradition and holidays. I love how rituals slow down time. That’s also nice about having kids — they get into all these things!

Children do force you to stop and smell the roses, so to speak.

I like that feeling that you’re all in it together. Everyone is doing the same thing at the same moment. That was nice about Holy Week in Greece or Nicaragua; I didn’t have to do anything, and there would be a religious parade outside my door. It was a moment of community. And yet, some things don’t interest me at all, like the Super Bowl. All of a sudden I have all this free time in February because it just doesn’t interest me — but don’t get me wrong, I will go to a Super Bowl party!

Still, the Super Bowl is tradition for many people, and plenty of rituals have grown around it.

It’s true. Instinctively, people want tradition. I think that’s part of the reason people make their own, because there’s a yearning for it. We want that community and a reason to pause.

Do you think that’s sort of what you’re doing with Martha Stewart Weddings, creating rituals? Perhaps that’s why weddings are such a big deal now?

There are things that are the same and things that have changed. I think part of the reason why weddings have become such a big deal is that loved ones are scattered and weddings are a great way to bring people back together. When people look back on the photo albums, it means so much to them to be able to see all the people they love together in one room. Back in the day it wasn’t the same, especially when everyone lived in the same village, or even the same home, or room! I think that people want to share, and create a symbol of bringing two families together.

I’m always interested in the details of the ceremony, whether it’s religious or not. People spend so much time and money on the reception, and for some, the ceremony is an afterthought. That’s where the actual event happens! Sometimes a couple says they want a short ceremony so that they can have a great reception. That’s great, but everyone came to celebrate with you as you change your life. I think we’re trying to rebuild the community and rituals that we’ve lost. Now there is so much freedom to create our own rituals, and I enjoy seeing things that couples are doing that speak to their own lives and how they want to spend that time together.

You’ve got a full plate these days. Anything else on the horizon?

I see myself writing another book. I have ideas I would like to work on, but it’s hard to get the time. When I’m not working I want to spend time with my kids and I don’t want to be holed up in an office, as much as I want to write. This is such a liminal time for me, with the new baby, and book, I’m just taking it in, one 20-minute segment at a time.

You bring up an interesting point. As an exemplar of a twenty-first century woman, is it possible to have it all?

I think you can do it all, but not at one time. I think you can do one thing for awhile, and something else for a while, and so on. It is always going to be a challenge for women. Chekhov was a doctor, but I bet he had someone to do his laundry. It’s fleeting, kids aren’t kids forever. You want to have that time together. It’s about finding the right balance, and that’s different for everyone.